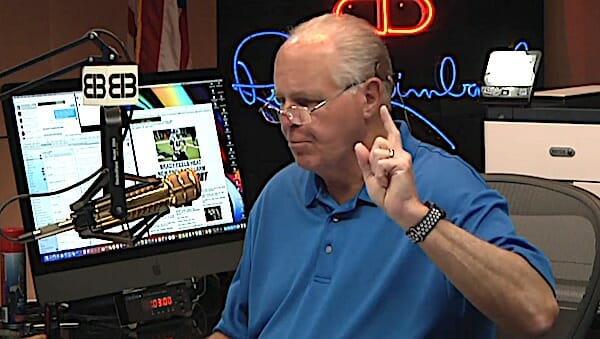 "It is possible that Donald John Trump is going to feel liberated like he hasn’t felt his entire term," Limbaugh said. "I mean, after this, what else can they do? After this, they will have thrown everything they’ve got — and he’s still going to be there."

He said impeachment "may backfire on them in ways they are not even calculating yet."

"Pelosi and some of the women were wearing black. Have you seen that? They're wearing black to signify what a horrible day. They're wearing black because this is the beginning of their funeral. I said yesterday that they're in the process of digging their grave. Today the grave gets dug deep to handle a whole lot of Democrat political carcasses and bodies that are gonna end up in this grave once we get to the election aftermath in November," he said.

Limbaugh said Democrats, the media and the left all know the impeachment effort has "bombed out."

"They know that this is a gigantic failure and a gigantic zero. And they know that they are trending in the wrong direction. They also know that there's nothing here. Nobody is reacting to a president being impeached in any way different than they react to any news story during the week," he said.

However, he said, "It's going the other way."

Trump wrote a letter to Pelosi on Tuesday charging she was using politics to subvert the Constitution.

"Donald Trump represents a form of adversity that they literally have no experience in dealing with. And it’s obvious that they don’t know how to deal with it. And that frustrates them. They already think Trump is barely above the level of scum on the life chart. They can’t believe that somebody barely above the level of scum is outsmarting them, outstrategizing them, outenergizing them, outlasting them. And it’s now all starting to show," he said.

Limbaugh then got personal about what will happen in the Senate.

"All Schumer and the Democrats can do is blowhard, pass gas — verbal gas. They can’t do anything, folks. They don’t have the power to call any witnesses."