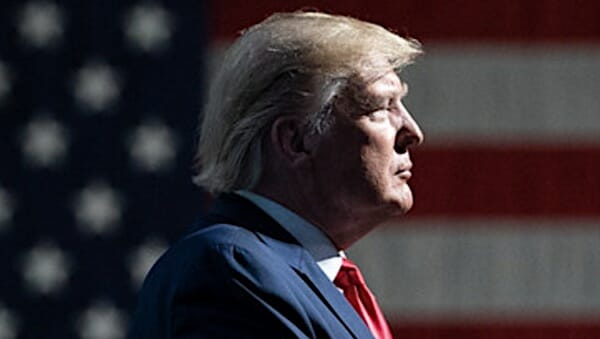 The U.S. Senate trial for the Democratic Party's impeachment of President Donald Trump is in limbo.

It's because House Speaker Nancy Pelosi, pressing the Senate to comply with her demands, has withheld the articles voted on by House Democrats.

Some scholars, including a witness for the Democrats, believe the unprecedented move is unconstitutional.

After all, that Constitution states: "The Senate shall have the sole Power to try all Impeachments. When sitting for that Purpose, they shall be on Oath or Affirmation. When the President of the United States is tried, the Chief Justice shall preside: And no Person shall be convicted without the Concurrence of two thirds of the Members present."

The Founders inserted no clause giving the House speaker authority to make such demands.

It's why Senate Majority Leader Mitch McConnell believes Pelosi eventually will give up her power play.

Fox News reported McConnell believes Pelosi "seems to think she can dictate the rules of a Senate impeachment trial."

McConnell, a Republican senator from Kentucky, said on "Fox & Friends," "She apparently believes she can tell us how to run the trial."

But that is "absurd," he said, saying she'll back down "sooner or later."

"We can’t do anything until the speaker sends the papers over, so everybody enjoy the holidays," McConnell said.

The Fox report explained Pelosi was trying "to pressure the Senate to agree to certain terms for a trial."

"She indicated the House would eventually send the articles over to the upper chamber but insisted it is up to the Senate to determine how the process develops going forward," the report said.

She doubled down on Monday, Fox News reported.

"The House cannot choose our impeachment managers until we know what sort of trial the Senate will conduct," Pelosi said. "President Trump blocked his own witnesses and documents from the House, and from the American people, on phony complaints about the House process. What is his excuse now?"

Pelosi was referring to the contempt of Congress article of impeachment. The White House argues it has the right to dispute any subpoenas for witnesses or documents and that such disputes should be resolved in court.

McConnell has argued for following the precedent of the Clinton impeachment.

"You listen to the opening arguments, you have a written question period, and at that point, in the Clinton trial, we had a decision about which witnesses to call and, as you can imagine, that was a pretty partisan exercise, but we didn’t let the partisan part of it keep us from getting started so all I’m doing is saying what was good for President Clinton is good for President Trump," McConnell said.

President Trump has been mocking Pelosi's delay in presenting the articles of impeachment to the Senate. He said the Senate can invalidate the articles if they're not delivered by a certain date.

The president said on Twitter: "Pelosi feels her phony impeachment HOAX is so pathetic she is afraid to present it to the Senate, which can set a date and put this whole SCAM into default if they refuse to show up! The Do Nothings are so bad for our Country!"

McConnell previously dismissed claims by Senate Minority Leader Chuck Schumer, who has been lobbying for impeachment for months, that the senators overseeing the trial should be "impartial."

"So let’s quit the charade. This is a political exercise. All I’m asking of Schumer is that we treat Trump the same way we treated Clinton."

Schumer, contradicting himself, has claimed he could be an impartial juror in the Senate even though he's already claimed Trump is guilty.