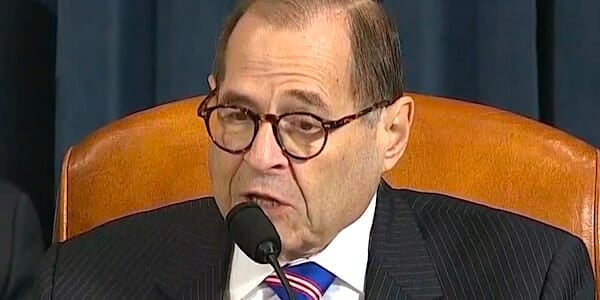 The Justice Department's watchdog report shows the chairman who drew up the articles of impeachment against President Trump falsely accused a Trump campaign aide of being a Russian spy who helped Moscow interfere in the 2016 election.

That fact undercuts Democratic Rep. Jerry Nadler's credibility as a prosecutor in the impeachment case, according to Capitol Hill sources, reports RealClearInvestigations.

"The chairman has no credibility left," said a Republican staffer on the judiciary committee, who spoke to RCI on the condition of anonymity. "He is not an honest broker."

Nadler, who made the accusation against Trump aide Carter Page in an April 2018 letter, dismissed as "a conspiracy theory" the president's characterization of the FBI spying as an "abuse" of the government’s surveillance powers.

But Inspector General Michael Horowitz found the FBI obtained the warrants to investigate Page under false pretenses, using the bogus Steele dossier as primary evidence, even after its sole source disavowed it.

Nadler -- in his February 2018 "Dear Democratic Colleague" letter rebutting a House Intelligence Committee report detailing FISA surveillance abuses -- wrote that Page "was, more likely than not, an agent of a foreign power."

"The Russian government waged a massive campaign to discredit our election. Carter Page appears to have played a role in that effort," Nadler claimed.

But Horowitz presented evidence that Page had assisted the CIA for several years in its Russian spying effort. And the IG found that an FBI lawyer doctored an email from the CIA that would have exonerated Page.

The FBI ultimately found no evidence Page was a Russian agent, and Robert Mueller never charged the onetime Trump aide in his special counsel probe.

In his 2018 letter, Nadler implied that then-House Intelligence Committee Chairman Devin Nunes was lying about what he had read in the classified applications and supporting documents.

"I have had the benefit of reading the materials that form the basis for the Nunes Memo," Nadler wrote, dismissing the Republican leader's condemnation of the FISA warrants as "embarrassingly flawed," a "disgrace" and "deeply misleading."

But RCI pointed out that Horowitz had access to the same classified information yet came to the opposite conclusion of Nadler.

A Republican congressional aide involved in the impeachment hearing said that two years ago Nadler "tried to impeach the Nunes Memo, and now the inspector general has exposed that effort as an embarrassing piece of dishonesty."

"So why should anybody trust him now to be an honest arbiter of the facts in impeaching the president?"

Nadler's office did not respond to requests for comment.

RCI recalled that after his February 2018 letter, Nadler issued a press release scolding Republicans for "overt attacks" and for requesting that IG Horowitz launch an investigation of the FBI over the abusive FISA warrants, which he called "a conspiracy theory."

"It is a shame that the Inspector General has to devote resources to investigate a conspiracy theory as fact-free, openly political, and thoroughly debunked as the President’s so-called 'FISA abuse,'" Nadler complained in his March 2018 press release.

"Any objective review of these claims should tell us what we already know — that the FBI was right, that there was sufficient evidence to continue investigating certain Trump campaign officials for their connections to the Russian government, and that the Republicans are desperate to distract from that investigation," Nadler wrote.

Schiff now acknowledges the FBI committed "serious abuses." But he insists they weren't "apparent to us two years ago."

However, Nunes delivered a letter on Sunday to Schiff accusing him of "excusing and covering up intelligence agency abuses" and being "complicit in the violation of an American’s civil liberties."