Investigative journalist Huey Freeman has written a compelling book challenging the notion that Border Patrol Agent Nick Ivie was killed by friendly fire. In "Who Shot Nick Ivie?" Freeman lays out the case that contrary to the government's claims, smugglers, probably from the Sinaloa cartel, shot Ivie in an ambush of him and two other agents. And he explains why the Obama administration put the friendly-fire spin out there.

While working one night in October 2012, Ivie was dispatched to check out a sensor alarm that had been tripped near the border between Arizona and Mexico. Two other agents followed him a bit later. They were in constant contact through their radios so they knew where each other was. Agent Graciela Borjas saw Ivie's light and then gunshots as the smugglers attacked Ivie and fatally shot him in the head. They shot Agent David Johnson, but he was able to keep going. Johnson shot back at the smugglers. Borjas said later that she thought she had fired her gun, but it turned out she did not fire any shots at all. Borjas told investigators afterward that she saw three or four suspects, and that one had a long firearm. She heard them talking after they fired the shots and thought they were speaking Spanish. Johnson told the FBI he saw someone wearing a blanket, something typical of a smuggler.

But the FBI claimed that Ivie had shot at Johnson, so Johnson responded back and fatally shot him. The FBI twisted what Borjas said, reporting that she had only heard the suspects and their long arm, so they designated her an unreliable witness. Freeman says the FBI documents are riddled with inaccuracies. Freeman has obtained all the FBI interview transcripts with her. Tellingly, the FBI has never released the interviews of Borjas and Johnson to the public. Even if it were friendly fire, which it wasn't, they're lying about the fact that no one else was involved.

The evidence shows that a smuggler seized Ivie's pistol from him and fired shots from it. If Ivie had shot his gun, the spent shells would have appeared near his feet. Instead, they were found a bit south of his body.

The FBI constantly leaked news of its cover-up investigation to the media. They said they would wrap up their investigation in merely a few days. This is unheard of for a cartel-related assassination. They never issued a final report, maintaining that Ivie's death was due to friendly fire. 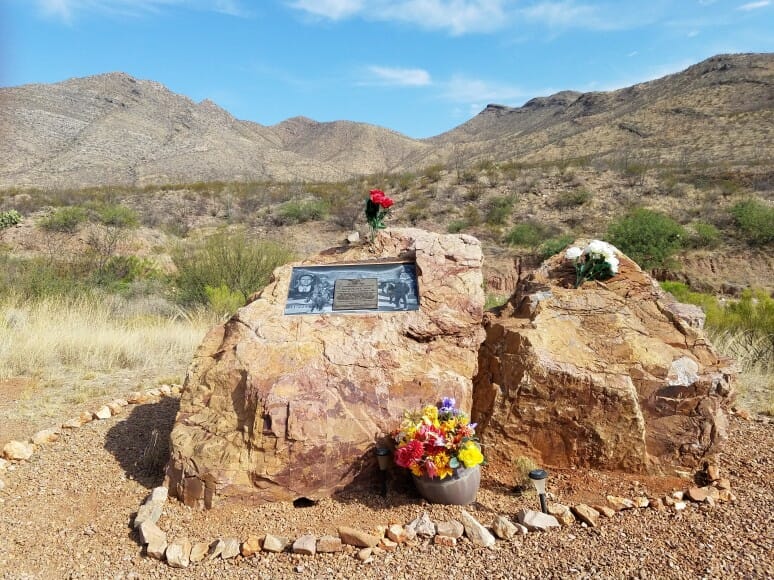 A monument to Agent Nicholas Ivie sits near Dead Girl Wash, where the
two surviving agents began the hike to Remax saddle. The saddle is
pictured directly behind the monument. (Huey Freeman)

The two agents were shot late on a Monday night. The previous Sunday, Univision and Fox News issued a report on all the people who were shot in Mexico from Fast and Furious guns. ABC followed up with a similar report. They compared it to the shooting of Agent Brian Terry. Eerily, Ivie was working out of the Brian Terry Border Patrol station, which was named after Terry after he was shot by killers using Fast and Furious guns.

A Los Angeles Times article came out revealing that the suspects had a .38 revolver and a long arm. The guns were seized later in Mexico, and Mexican law enforcement connected them to Ivie's shooting. Border Patrol agents, some on condition of anonymity, told Freeman they believed the investigation was shut down because the guns were from Fast and Furious. None of them believed what the FBI was saying – but they couldn't speak out since they were scared of retaliation and being criminally prosecuted.

The smugglers were arrested by Mexican authorities, who interviewed them. Their names ran in a Mexican newspaper. One headline actually said, "The killers of Ivie were arrested." A woman sent a Facebook post to a Mexican news station complaining that her brother and cousin were still incarcerated, which she didn't understand since the FBI had cleared them of the killing. The FBI never fully acknowledged that the suspects had been arrested. The suspects had Facebook pages where they posted photos of AK-47 rifles and the arrest of criminal suspects.

Freeman thinks Barack Obama, who was running for reelection against Mitt Romney at the time, didn't want the negative publicity about dangerous drug cartels out in the media, so that's why he came up with the friendly-fire ruse. The FBI under Obama was totally corrupt. Freeman refers to the Obama Bureau of Investigation, separate from the FBI.

Freeman asks, "How could anyone be killed by suspects who were in custody, but the agent was also killed by a fellow agent, without the involvement of any suspects?" Freeman hopes his book gets the truth out to the public, and says the two surviving agents should receive honors for their brave actions. Freeman believes the FBI's successful cover up of the murder emboldened the agency to spy on Donald Trump's 2016 presidential campaign.

Since his book came out, Freeman has discovered more evidence that it's accurate. Two Border Patrol agents pulled him over when he was driving from Arizona to New Mexico a few days ago. He showed them his book. One agent told him about another agent they knew who was supposedly killed by a tractor trailer, but said he didn't believe the official explanation. The other agent saw Ivie's body before the autopsy. He said if he had really been shot with Johnson's M4, his head would have exploded. Ivie's death was caused by a clean hit to the center of his forehead – with no exit wound.

It is horrendous that our government would cover up the murders of Americans by Mexican cartels, merely to help politicians get reelected and hide their efforts to destroy our gun industry through Fast and Furious. The Obama administration has blood on its hands, and we can only hope that President Trump can clean up the FBI.

Rachel Alexander
Rachel Alexander is a senior editor at The Stream. She is a political columnist and the founder and editor of Intellectual Conservative. Alexander is a regular contributor to Townhall and The Christian Post. She was ranked by Right Wing News as one of the 50 Best Conservative Columnists from 2011-2017 and is a recipient of Americans for Prosperity's RightOnline Activist of the Year award.
So what's next for QAnon?
Our presidential election was disturbingly similar to Uganda's
Did Trump incite insurrection?
No changes to everyday life under Biden? Riiiight
Mr. President, pardon Jon Woods, a victim of 'process crimes'
See more...