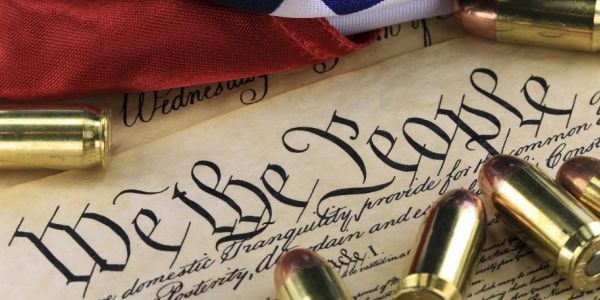 In what has to be one of the biggest flip-flops in American political history, officials in Virginia now are demanding all residents pledge blind obedience to what the state says is right.

That's only a few short months, or years, after they argued that state law didn't have to be followed because it was wrong, in their opinion.

It involves one of the biggest "gun fights" ever in the nation. Not a "gun fight" in that shooting is involved, but it does impact directly the Second Amendment to the United States Constitution, that which protects the right of citizens to "keep and bear" arms.

The recent election saw Democrats take the majority of the state legislature and join a Democrat in the governor's office. As Democrats do when they are in the majority, they announced plans for a long list of gun restrictions and limits, suggesting strongly to some, because of an allocation for more detention facilities for adults, an ultimate plan to confiscate guns and turn gun owners into criminals.

Most recently, The Washington Post reported the Democrat attorney general, Mark Herring, released an "opinion" that "there is no legal weight to the 'Second Amendment sanctuary'" resolutions being passed all over the state – actually by the dozens.

Herring claimed, in support of his party's political agenda, that if the legislature approves new gun bans, "They will be enforced, and they will be followed."

It came about because gun rights activists have obtained in more than 110 Virginia localities resolutions or some other statement that expresses that local agencies will not enforce gun bans they believe are unconstitutional.

Gov. Ralph Northam alone has demanded eight gun-restricting measures, such as a "red flag" law that lets authorities seize firearms from someone on a whim.

Herring's claim was multi-level, in that he believes the state constitution establishes that all localities are subject to the authority of the general assembly. He also said localities only have the power given them by Democrats in the Capitol.

He demanded, "localities and local constitutional officers cannot nullify state laws and must comply with gun violence prevention measures that the General Assembly may enact."

WND obtained a letter from the legal team of William J. Olson P.C. that was addressed to the general assembly, the officers of the state, and "the people of Virginia."

It was signed by officials for the Virginia Citizens Defense League and Gun Owners of America.

They point out that the statements that local government officials "must comply with gun violence prevent measures," that Second Amendment resolutions have "no legal effect" and that no one in local government can "declare state statutes unconstitutional," each is, in fact, "untrue."

"Based on [Herring's claims], and various statements reported in the press, it is apparent that AG Herring and Gov. Ralph Northam believe that Virginia localities have a duty to actively assist the commonwealth in the enforcement of any law enacted by the general assembly. These officials appear to believe that such blind obedience is required irrespective of whether a law violates the U.S. Constitution, the Virginia Constitution, or is manifestly destructive of the pre-existing rights of the people of Virginia," the letter explains.

"This radical view is demonstrably false, and ignores the significance of the fact that local officials are required by law to take an oath to support the federal and state constitutions above the laws enacted by the general assembly."

In fact, the letter said, Herring and Northam cannot "credibly demand" such allegiance, since "that view directly contradicts the positions they have taken in the past. Indeed, on three recent occasions, AG Herring and Gov. Northam have taken exactly the opposite legal position, with respect to: (i) the defense of the Virginia Marriage Amendment to the Virginia Constitution; (ii) the general assembly's refusal to assist the federal government with the arrest and detention of civilians as authorized by the National Defense Appropriations Act of 2012; and (iii) the right of localities in Virginia to become sanctuary cities with respect to the enforcement of federal immigration laws."

The current Second Amendment resolutions were prompted by local concerns that the Democrats in the state government are ready to violate the U.S. Constitution.

"These petitions and supplications are not being expressed as mere preferences, but as constitutional necessities. The vast majority of Virginia localities have made it clear that any attempt by the general assembly to forcibly disarm Virginians, to register their weapons (in preparation for their eventual later forcible seizure), or otherwise to turn law-abiding Virginians into felons, would be ultra vires acts, void, and thus not law at all."

The letter explains that there is no constitutional or statutory provision that requires compliance with an unconstitutional state law.

"What happens when a [state] statute and the Constitution conflict?" the letter asks. "In such a case, county boards owe no obeisance to an unconstitutional state statute, but rather to the higher law of the Virginia and United States Constitutions, and to the people – the authorities from which these officials derive their power. The offending laws are a nullity – void – as if they were never enacted."

It was Herring who in 2014 said, regarding the Virginia Marriage Amendment adopted by the people, "I cannot and will not defend laws that violate Virginians' rights."

It was in 2012 that state lawmakers there actually prohibited Virginia from assisting the federal government in the "unlawful detention of U.S. citizens pursuant to the NDAA."

In 2018, Northam vetoed a bill that would ban localities from interfering with federal immigration actions.

He said localities must be allowed to declare themselves immigration sanctuaries.

The letter concluded, "Should the Virginia general assembly, along with the Virginia governor or attorney general, enact and attempt to enforce a law which is prohibited by Second Amendment to the U.S. Constitution, or Article I, Section 13 of the Virginia Constitution, and the pre-existing, inalienable rights of the people, then such law is of no legitimacy – and void."