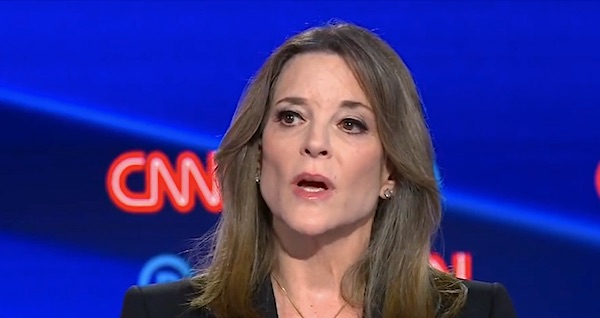 Democratic presidential candidate Marianne Williamson, among those far, far behind in the race, on Monday proved Ronald Reagan was right, once again.

The hero of conservatives once said: "It isn't so much that liberals are ignorant. It's just that they know so many things that aren't so."

The only problem is that there was no such pardon.

This is a woman who gets furious when she’s told that she’s unserious and not prepared to run. pic.twitter.com/3uC8Nqfidj

Marianne Williamson learns nothing good can come from tweeting at 12:53 a.m. https://t.co/OfobJzkOIc

The Hill reported Williamson was "roasted" for the posting.

It originated, apparently, with a "farcical" article at MoronMajority.com a couple weeks ago. Then it was aggregated by The Daily Kos.

"There is something deeply sinister about Trump pardoning Charles Manson, even posthumously. Dog whistles of the very worst possible kind," Williamson tweeted on Monday.

The statement was deleted later.

"This never happened. Williamson just tweeted this," wrote journalist Yashar Ali. "This is a woman who gets furious when she’s told that she’s unserious and not prepared to run."