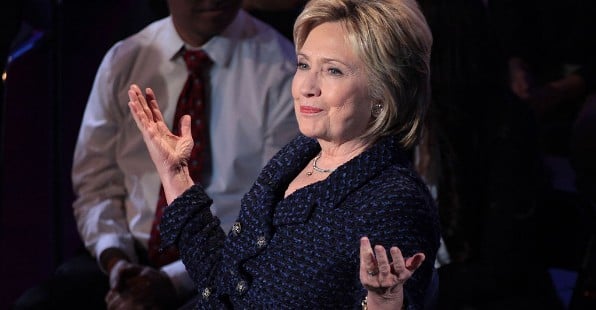 If Hillary Clinton were to attempt a third run for the White House, she would be the front-runner for the Democratic nomination, according to a Harvard/Harris poll.

The national sample of Democratic voters found that if Clinton were running, 21% would support the former secretary of state while the current Democratic front-runner, Joe Biden, would receive 20%.

Clinton is in the media spotlight promoting her book "The Book of Gutsy Women."

Over the weekend, in an interview with the U.K.'s "Graham Norton Show," Clinton said she had been "deluged" with pleas to give it another shot.

"I'd have to make up my mind really quickly, because it's moving very fast," she said.

In an interview last week with Howard Stern, she was asked whom she would support in the 2020 race.

"Whoever can win," she replied.

In a mid-November radio interview with the BBC she said people were urging her to enter the race.

"I will certainly tell you, I'm under enormous pressure from many, many, many people to think about it.

"But as of this moment, sitting here in this studio talking to you, that is absolutely not in my plans," she said.

Clinton sometimes has dodged the question with an attempt at humor.

"What would it take you to run?" Sorkin asked Clinton.

"I've always been a very, very slow runner," she said. "I am embarrassingly slow. I've tried to run races and I am so far behind that I start to walk acting like that was what the plan was the whole time. So, I don't know that I'm going to take up competitive running right now."

Sorkin ultimately got her to focus on the speculation that she might attempt another try at the White House.

"I would have done everything I could to try to get us positioned for the future," she said. "I think I could have done a really good job. I think the last election was deeply flawed and that there were so many unprecedented problems in that election."

Bill Clinton: 'She may or may not'

Longtime Clinton adviser Philippe Reines said in October on Tucker Carlson's Fox News show that she ran for president in 2008 and 2016 "because she thought she would be the best president."

"If she still thought that now, if she thought she had the best odds of beating Donald Trump -- I think she would think about it long and hard."

Carlson asked: "She hasn’t foreclosed the possibility, I guess that's what I’m saying?"

“No, she has not,” Reines said, agreeing with Carlson that it wouldn't "surprise anybody who’s followed the Clintons."

President Bill Clinton said at a Georgetown University Law School event: "She may or may not ever run for anything, but I can't legally run for president again.”