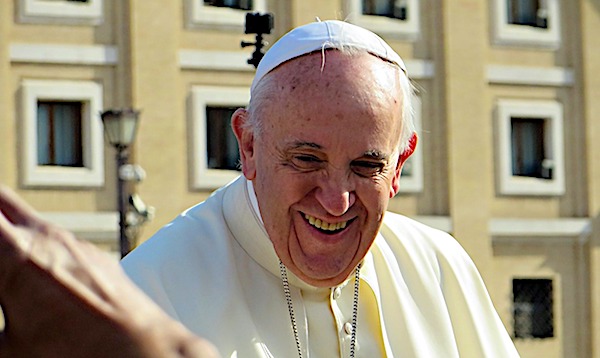 Arguing "we are not living in the times of the Crusades," he said that Christians should declare the Gospel only if their witness prompts non-believers to ask questions.

He was at the Pilo Albertelli State High School, the Catholic News Agency reported, when a student asked how to approach people of other faiths.

Francis said that as a son of a migrant, he grew up in a "culture of coexistence" in Argentina.

"I went to public school, and we always had companions from other religions. We were educated to coexistence," he said.

"This taught me a lot, that we are all the same, all children of God and this purifies your gaze, it humanizes it," he said.

The pope said that in Argentina there is a small group of "narrow-minded Catholics" who "do not want Jews, do not want Muslims."

He said the "the last thing I should do is speak."

"I should live my faith with consistency. And it will be my witness that will awaken the curiosity of the other who may then ask: ‘But why do you do this?’ And yes, then I can speak."

Matteo Bruni, the Holy See press secretary, gave the Vatican's interpretation of what the pope was saying to the students'

"In addressing non-believers, [Pope Francis] emphasized the value of witness to awaken curiosity about the Gospel and faith," Bruni said.

Francis said the church "grows by attraction, by witness," not by "proselytism."

“Soccer teams can do proselytism, this can be done, political parties can do it, but there should be no proselytism with the faith. And if someone asks me: ‘But why do you do this?’ Read, read, read the Gospel, this is my faith. But without pressure."

Francis referred to a fictional poem by the 11th century poet La Chanson de Roland as an example of Christians trying to convert Muslims by the sword," noted Breitbart News.

"It is an ugly thing but it made me suffer so much, a passage from the La Chanson de Roland, when the Christians, the crusaders had defeated the Muslims and then all the Muslims were lined up and at the front of the line was a priest and a soldier," Francis said. "The priest stood in front of the baptismal font and as each one approached, he would ask: 'Baptism or the sword?'"

Francis said "this happened in history," but when he cited the poem last month, critics pointed out it is fiction.

The Song of Roland is based on a historical event, Charlemagne's expedition to Spain in 778 on behalf of Muslim governors who wanted to defeat a Muslim rival.

The expedition was a failure, contrary to the pope's account. And Roland's work doesn't even have a Christian holding the sword.