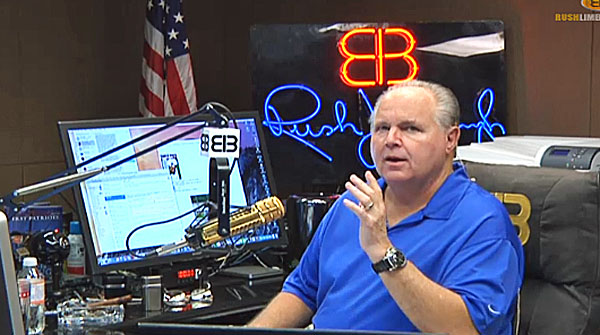 Despite the fact that House Speaker Nancy Pelosi snapped when a reporter asked her about "hate" for the president and her angry denial, she and her party actually do hate the president.

Pelosi was asked on Thursday about the issue.

"Don't mess with me when it comes to words like that," she scolded. "As a Catholic, I resent your using 'hate' in a sentence that references me."

"I want to go back to something he said. Jonathan Turley addressed this in a moment of sanity when they had those three law professors on there before the Round Mound of the Gavel’s hearing on Wednesday," Limbaugh said. "You heard him say, 'Some Democrats now are getting concerned that this is expanding, that all of a sudden, the article of impeachment may include the Mueller report.'"

"Pelosi said they would yesterday, in that press conference where she was asked by James Rosen, 'Do you hate the president?'"

But they "hate his guts," Limbaugh said. "They hate you for electing him."

He said the Democrats' strategy still centers on Russia.

"They are never gonna be able to let Russia go because that was the grand scheme. That’s where everybody in the deep state went to work on getting rid of Trump, and they just cannot accept that it’s failed yet. So they’re gonna keep going back to it."

He continued: "For crying out loud, these people are off the rails in what they’re doing, and it’s a sign of their frustration. They can’t gain any ground on Trump at all. The idea that the president going to court represents obstruction of justice? That’s the kind of mentality you get from a totalitarian. Nancy Pelosi says, 'I want those documents.' You say, 'You can’t have ’em. I’m not gonna give ’em to you.' 'You better give ’em to me or we’re gonna impeach you.' You say, 'Screw you,' and you go to court to try to stop it."

Limbaugh explained that for the Democrats, refusing to do what Pelosi wants "is a crime."

"And they’re gonna put that as an article of impeachment? There are three Democrats now who are openly expressing reservations, and there is a Republican out there from here in Florida. His name is Francis Rooney. Not too long ago, Francis Rooney was all-in on impeaching Trump — he’s a Republican — and then he heard this. He heard that Pelosi wants to put an obstruction of Congress article of impeachment in there based on Trump trying to go to court."

He pointed out that Democrats may not have the votes now for impeachment.

"What’s gonna happen to get them? They’re not gonna turn up any evidence. There isn’t any. Then you’ve got these thirty-one Democrat districts that Trump won — and, remember, there have been polls taken in those districts. This has not gotten a lot of the coverage. We mentioned it here. Some Drive-By network polling units went out to some of these districts that Trump won in ’16 that then voted Democrat in ’18," he said.

"And they asked people in those districts, 'Okay. So you voted for Trump, then you voted for a Democrat in the midterms. What are you gonna in 2020?' Well, 80% of them said they’re going back to Trump. That flipped them inside out, upside down. If that’s the case, then many of those thirty-one are gonna say, 'Gee, am I gonna [get] beaten here two years later after I’ve won this seat? If the people in my district still love Trump, how in the hell am I gonna help myself by voting to impeach the guy?'"