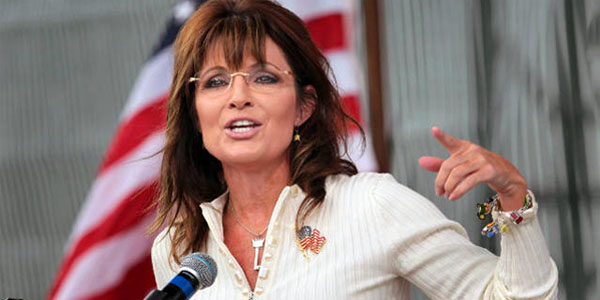 Former Alaska governor and vice presidential candidate Sarah Palin says "advertising revenues" from the New York Times will do just fine as compensation her for an allegedly defamatory story.

Palin two years ago filed a lawsuit against the Times over an editorial by the newspaper that tied her to the January 2011 shooting of an Arizona congresswoman.

In fact, she had no connection at all to the shooting.

Palin's lawyers allege defamed her only hours after then-House Majority Whip Steve Scalise, R-La., was wounded in a shooting by a Bernie Sanders supporter.

The complaint charges the Times and editorial page editor James Bennet intended to "maliciously" harm Palin or acted "in blatant disregard of the substantial likelihood of causing her harm."

The article alleged a connection between Palin and the shooting of Rep. Gabrielle Giffords, D-Ariz. The lawsuit was filed in 2017 but was dismissed, then revived and reinstated this year.

The newspaper, at the time the claim was filed, said it would "defend against any claim."

The editorial alleged Palin's rhetoric was linked to the shooting that killed six and injured Giffords and others.

The newspaper later conceded that "no such link was established."

The editorial also wrongly charged that an ad from Palin's political action committee put "Giffords and 19 other Democrats under stylized cross hairs[sic]."

The filing asserts Bennet and the Times "knew to be false" their claims that "Palin was clearly and directly responsible for inciting a mass shooting at a political event in January 2011."

"When Mr. Bennet wrote and the Times published the defamatory passages in the Palin article, they had actual knowledge that there was no direct and clear link between Gov. Palin and the Loughner shooting and that Gov. Palin did not politically incite Loughner's horrific crime."

In that attack, Jared Laughner shot 13, killing six including a judge and a 9-year-old girl and wounding Giffords and others.

Bennet harbors "deep-seeded resentment and animus toward Gov. Palin and her political views," the complaint charges.

"That ill-will and hostility motivated Mr. Bennet and the Times to use the false assertions of fact about Gov. Palin's incitement of and 'direct' and 'clear' link to Loughner's shooting as an artifice to exploit and score political points using the shooting that occurred in June 14, 2017, when James Hodgkinson, a man the Times described as a 'Bernie Sanders support and campaign volunteer virulently opposed to President Trump' launched a sniper-style attack with an assault rifle upon members of Congress…"

"Incredibly, at the time of publication Mr. Bennet knew about, remembered and had published, reviewed, edited and approved numerous articles-columns confirming that there was no established connection between Gov. Palin and Loughner's 2011 shooting," the amended complaint states.