The New England Patriots have found themselves embroiled in another controversy involving team employees filming another team.

The Patriots have issued an apology, and claimed what happened was simply "an unintended oversight."

But not everyone is buying it.

This latest controversy, which involves two other teams, gained steam Monday, one day after the Cleveland Browns defeated the Cincinnati Bengals in Cleveland.

TRENDING: Trump on Virginia gun grab: 'It will never happen as long as I'm here'

The Bengals and Patriots are slated to meet in Cincinnati on Sunday.

Taylor confirmed that the league was investigating the matter.

"Patriots’ advance scout was not filming but being filmed, per a league source," Schefter tweeted. "He was being filmed for a feature the team produced called, 'Do Your Job.' The video crew was credentialed by the Browns to shoot video in the press box and their PR person was aware, per the source."

Patriots’ advance scout was not filming but being filmed, per a league source. He was being filmed for a feature the team produced called, "Do Your Job." The video crew was credentialed by the Browns to shoot video in the press box and their PR person was aware, per the source

An official for the Bengals, who were playing at Cleveland Sunday, saw a member of the video crew wearing a Patriots’ shirt and alerted the league, which confiscated the video, according to the source. NFL has video; Patriots say video is a press-box feature of the advance scout.

The Patriots would go on to apologize in a statement posted to the team's website and to social media. The team said its video crew had been credentialed by the Browns but acknowledged they had not informed the Bengals and the league.

Notably, the Patriots maintained that they had done nothing nefarious.

"On Sunday, Dec. 8, the content team sent a three-person video crew to the Bengals-Browns game at FirstEnergy Stadium in order to capture one part of a longer feature on the Patriots scouting department, in this case a Patriots pro personnel scout while he was working in the press box," the team said. "While we sought and were granted credentialed access from the Cleveland Browns for the video crew, our failure to inform the Bengals and the League was an unintended oversight."

"In addition to filming the scout, the production crew -- without specific knowledge of League rules -- inappropriately filmed the field from the press box. The sole purpose of the filming was to provide an illustration of an advance scout at work on the road," the statement went on.

"There was no intention of using the footage for any other purpose. We understand and acknowledge that our video crew, which included independent contractors who shot the video, unknowingly violated a league policy by filming the field and sideline from the press box. When questioned, the crew immediately turned over all footage to the league and cooperated fully."

The team also said its football staff had no involvement in the matter, aside from having known about the very existence of the "Do Your Job" episode in the first place.

So no harm, no foul, right?

The thing is, this is not the first time the Patriots have been embroiled in such a controversy.

As CBS Sports' John Breech pointed out on Twitter, the Patriots' explanation sounded an awful lot like their reported excuse for taping opponents' signals as part of the Spygate scandal in the 2000s.

That scandal reared its ugly head following a 2007 game against the Jets when a Patriots video assistant was caught taping Jets coaches.

During Spygate investigation, NFL found that Patriots had excuses ready in case an advance scout got caught filming another team. One of those excuses: Tell them you need the footage for a team show. #Patriots https://t.co/VQ2mebxENu pic.twitter.com/zt5Mzr8MGX

In a 2015 deep dive into Spygate, ESPN reported that Patriots video department employee Matt Walsh claimed videographers who were taping signals -- in a clear violation of NFL rules -- were told to be prepared with an alibi.

"During games, Walsh later told investigators, the Patriots' videographers were told to look like media members, to tape over their team logos or turn their sweatshirt inside out, to wear credentials that said Patriots TV or Kraft Productions," ESPN reported. "The videographers also were provided with excuses for what to tell NFL security if asked what they were doing: Tell them you're filming the quarterbacks. Or the kickers. Or footage for a team show."

There's no proof that something similar was going on in this most recent controversy, though given the Patriots' history, it's certainly worth probing the issue.

Head coach Bill Belichick -- who was in charge during the Spygate scandal as well -- has denied any wrongdoing this time around.

FISA ruling on spy warrants could void ALL Mueller convictions 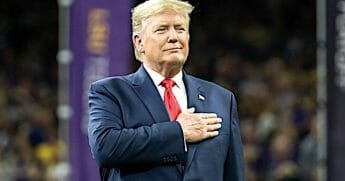