There are some odd things going on in our country lately.

In this case, the disconnect between federal marijuana laws and that of the states.

Marijuana is considered an illegal substance by the feds, yet at least 11 states have legalized its purchase and consumption – either strictly medically and/or for recreational use.

The United States Constitution is unmistakably clear concerning the relationship of federal and state law.

So this raises the question of legality. Is it constitutional for states to legalize marijuana?

But you also have to ask just why states are so all-fired anxious to legalize the drug.

This, in my opinion, is a rhetorical question, for we should all know the answer. It's the same answer to every question of why a state does practically anything. Taxes!

Legalizing marijuana is seen as just another source of revenue. As of June 2019, 11 states have fully legalized pot for recreational use and another 19 for strictly medical purposes. 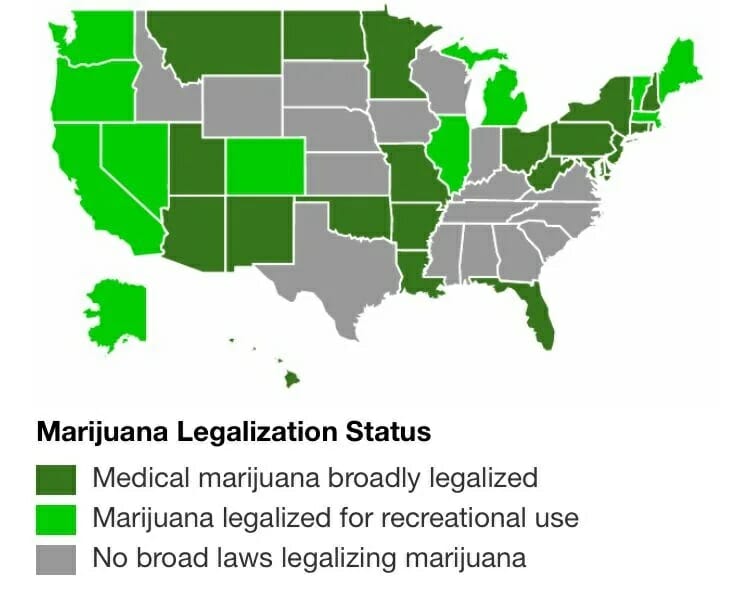 Taking a closer look at the map, we see that the states where pot is fully legal tends to be the furthest to the left politically. But this is not the only common denominator. The most leftist states also happen to be the most chronically broke.

These states, largely, haven't legalized marijuana because their people demanded it or because they're so enlightened. They did so for the tax money. And one city, Evanston, in one of the most bankrupt states in the country, Illinois, has decided to use the sin-tax revenue for something that has nothing to do with pot.

Usually the promise of a new tax, particularly a sin tax, is to fully fund a program to combat the abuse of that which was just legalized. And yes, it is as stupid as it sounds.

But Evanston has decided instead to use the marijuana tax "to establish a local reparations program."

I'm sure all the white stoners in Evanston will be happy to pay taxes to benefit only the city's black residents, which makeup 18.1% of the city's overall population. But that seems fair because social justice demands it be so.

"Taxes from the sales of recreational marijuana will go toward job training and other benefits for the black population of Evanston. 'We can implement funding to directly invest in black Evanston,'" said alderman and social justice warrior Robin Rue Simmons, the person who proposed the bill. "Leaders say it would help address the lingering institutional effects of slavery and discrimination," and that the tax on marijuana will "be invested in the community it unfairly policed and damaged."

Since Evanston is only 18.1% black, I suppose the implication is that the other 81.9% of its residents should just shut up and be happy not to receive any portion of the new tax revenue.

There hasn't been a slave in the state for over 156 years. So I guess the question is just how long does something like this linger. Seems like 150 years of lingering is a bit excessive. But then there appears to be no statute of limitations on, dare I say, shaming, race-baiting and redistribution. It's classic racial thuggery.

And the last question is: What will the feds do? Will they crack down on these rogue states and cities, or relent and legalize pot nationwide? After all, the disparity between federal and state/local laws will eventually have to be addressed.

Brent Smith
Brent Smith, aka The Common Constitutionalist, is a constitutional conservative who advocates for first principles – the founders' original intent and enemy of progressives. He is former Navy and a martial arts expert. Smith considers himself just an average Joe with no formal journalism background – but rather than simply complain about the state of our nation, he took to the Internet to battle the left. Check out Brent Smith's blog.
@Ratifiedin1791
How IRS agents are like mass shooters
Government has no solutions – never has, never will
George Washington wouldn't be wearing a Ukraine flag pin
'Deadnaming' is violence? Not hardly
Slow down on the November 'red wave' talk
See more...

The good intentions of Freedom of Information plans

The harm to voters when candidates drop out, but kept on ballots