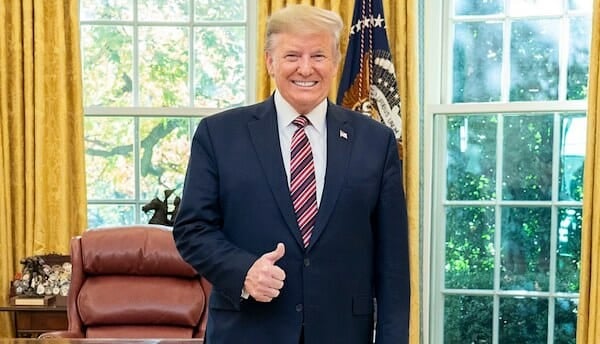 President Trump's approval rating has risen six points since November amid public hearings that Democrats hoped would boost their case for impeachment.

Former President Obama's approval rating at this point in his first term was 46%.

Rasmussen polls 1,500 likely voters by phone nationwide, 500 each day over three days, with a margin of error of plus or minus 2.5 percentage points.

Meanwhile, an analysis of polls by the Washington Post indicates pursuing impeachment could hurt Democrats in battleground states they need to defeat President Trump in 2020.

An average of 44% of those surveyed in key states in a dozen polls in October and November supported impeachment, with 51% opposed, the Post found, according to Axios.

House Speaker Nancy Pelosi announced Thursday that House Democrats will move ahead with drafting articles of impeachment against President Trump.

"Sadly, but with confidence and humility, with allegiance to our founders, and a heart full of love for America, today I am asking our chairmen to proceed with articles of impeachment," Pelosi said.

The House Judiciary Committee has scheduled a hearing for Monday to present evidence obtained in the House Intelligence Committee's Ukraine investigation led by Chairman Adam Schiff.

Politico previously reported some vulnerable House Democrats in swing districts are being pummeled by ads by Republican-aligned groups focusing on impeachment. The incumbent Democrats, Politico said, are demanding a much stronger counteroffensive from their party and its allies.

Politico noted that impeachment ranked last in a list of 11 government priorities among independents in a recent Politico poll.