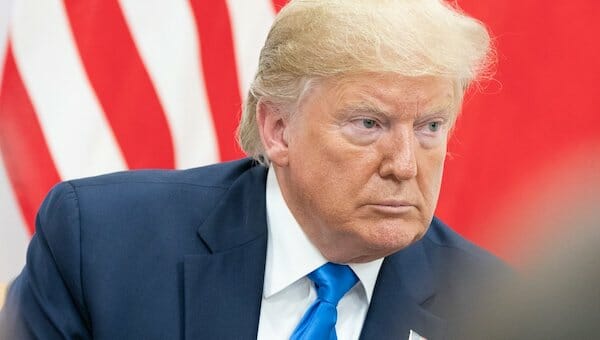 Last week, Bloomberg News announced that it would not investigate 2020 Democratic presidential candidates.

But it would continue to probe President Trump.

Now the president's campaign has responded by de-credentialing the news organization.

"The decision by Bloomberg News to formalize preferential reporting policies is troubling and wrong," he said.

"Bloomberg News has declared that they won’t investigate their boss or his Democrat competitors, many of whom are current holders of high office, but will continue critical reporting on President Trump. As President Trump’s campaign, we are accustomed to unfair reporting practices, but most news organizations don’t announce their biases so publicly. Presented with this new policy from Bloomberg News, our campaign was forced to determine how to proceed," he said.

Radio host Rush Limbaugh said Monday he believes the White House "ought to do the same thing."

"Just stop credentialing anybody from Bloomberg, since they've openly said they're not going to cover any Democrats, good or bad," he said.

"I can say it with nearly ontological certitude."

"This is a journalistic giant, churning out 5,000 stories a day, some of them market-moving. Bloomberg News has 2,700 journalists spread across 150 bureaus around the globe, along with a television network, a magazine and those extremely lucrative Wall Street terminals," he said of Bloomberg News.

"But after the 77-year-old billionaire jumped into the Democratic race, the news service’s editor-in-chief, John Micklethwait, issued an edict to his staff. 'We will continue our tradition of not investigating Mike (and his family and foundation),' the memo said. And that prohibition would extend to his rivals in the party because 'We cannot treat Mike’s Democratic competitors differently.'"

Kurtz said that puts everyone from Joe Biden to Bernie Sanders to Cory Booker to Bloomberg "off-limits."

"But its team 'will continue to investigate the Trump administration as the government of the day,'" he wrote.

"If you wanted to come up with a policy that would seem to favor Bloomberg and his re-adopted party – he ran for mayor as a Republican – while disadvantaging the man whose job he wants, it would be hard to beat this," Kurtz wrote.

"I get that it’s a messy situation, but this is a compromise that satisfies precisely no one. If Bloomberg’s family (and presumably Joe Biden’s son) are off-limits, are Donald Trump’s kids still fair game? Bloomberg News has always been squeamish about covering its founder. A similarly restrictive policy was in place during Mayor Bloomberg’s 12-year tenure. But now he’s running for the highest office in the land. What issue doesn’t in some way touch on the presidential campaign?"

He noted, "Megan Murphy, Bloomberg’s former Washington bureau chief, tweeted that the policy was 'ridiculous' and 'not journalism.'"

Brit Hume wonders if Biden can finish his term