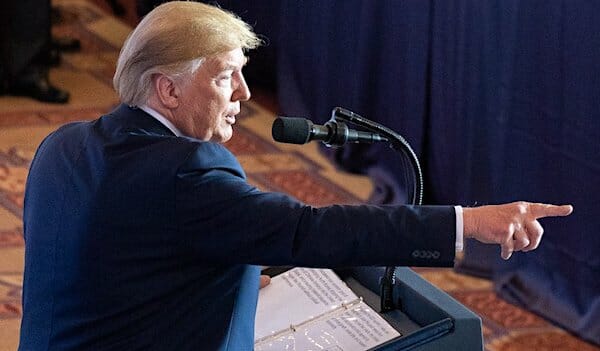 Guaranteed: If President Trump wins re-election in 2020, Rep. Adam Schiff, D-Calif., won't be on the short list for his Cabinet.

"I think he's a maniac. I think Adam Schiff is a deranged human being," the president said in response to a reporter's question about the House Intelligence Committee chairman who has led the impeachment drive to this point.

"I think he grew up with a complex for lots of reasons that are obvious," Trump said.

The president's comments came as Schiff's team prepared a report on the recent public hearings in which 12 Democratic-selected witnesses testified regarding the claim that President Trump used the power of his office to pressure Ukraine's president to probe a political rival.

The president took the question about Schiff while in the United Kingdom for NATO talks.

"I learn nothing from Adam Schiff," he said. "I think he's a very sick man. And he lies. Adam Schiff made up my conversation with the president of Ukraine."

The reference was to Schiff reading into the congressional record a fabricated exchange between Trump and Ukraine President Volodymyr Zelensky. When challenged later by Republican members, he claimed it was a "parody."

In response, at least 125 Republicans co-sponsored a resolution to censure him.

Schiff claimed "the essence" of Trump's message to Zelensky was: "We've been very good to your country. Very good. No other country has done as much as we have. But you know what, I don't see much reciprocity here.

"I hear what you want. I have a favor I want from you, though and I'm gonna say this only seven times, so you better listen good," Schiff continued. "I want you to make up dirt on my political opponent, understand? Lots of it ... on this and on that."

President Trump, who calls the congressman "Shifty Schiff," urged him to resign, saying he "lied to Congress and attempted to defraud the American public."

In opening statement, Rep. Schiff makes up dialogue to represent what Trump said to Zelensky. A rough transcript of the president's words exists, and is available, but Schiff's version is more dramatic. pic.twitter.com/f7gS4KIPge

Twitter news aggregator Twitchy commented that Schiff "clearly wanted those watching (and the media subsequently reporting what he said) to believe he was reading directly from the call transcript, but instead Schiff was in fact taking liberties – and lots of them."

Democrat Rep. Adam Schiff (CA) admits that his blatant fabrication of quotes from Trump's Ukraine call was "wrong" after he got called out

Schiff claims it was a "parody"

Fox described the president's language as being "harsh."

"One of the reasons people keep talking about it is that's what they saw. … A lot of people didn't read [the transcripts]. A friend of mine called me -- about the top person in New York. … 'Gee I didn't like what was said.' I said, 'Where did you see it. Did you read it?' 'No I didn’t read it I heard about it.' That's not what was said. I sent him a copy… he said, 'This is straight.'"

Trump said, "This is a sick person. He's a liar. Nancy Pelosi knew he was lying…. and said he told the truth. So she was lying too…"