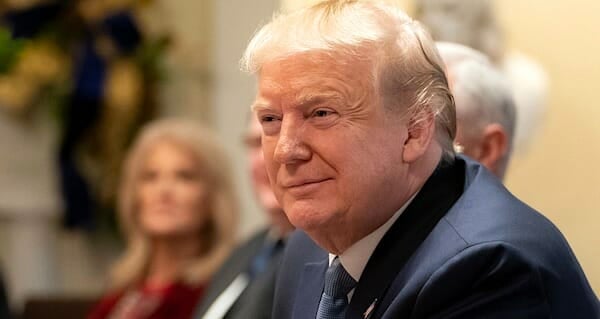 President Donald J. Trump participates in a roundtable discussion on the Governors' Initiative on Regulatory Innovation Monday, Dec. 16, 2019, in the Cabinet Room of the White House. (Official White House Photo by Tia Dufour)

Lawyers close to President Trump are arguing that House Speaker Nancy Pelosi's delay in sending articles of impeachment to the Senate could mean the president hasn't actually been impeached.

Bloomberg News, citing a person familiar with the legal review, reported  the White House legal theory is that the U.S. Senate should already have jurisdiction if Trump indeed were impeached.

The U.S. Constitution, they argue,  gives the Senate "the sole Power to try all Impeachments." And as long as the lower chamber doesn't report charges to the Senate, impeachment has not been formalized.

Trump said at the Oval Office on Thursday it was "unconstitutional" for Pelosi not to submit the articles of impeachment to the Senate.

Earlier Thursday, Rep. Jim Clyburn, D-S.C., the House majority whip, was asked by CNN anchor John Berman if he was "suggesting it's possible you will never transmit the articles of impeachment."

"If it were me, yes, that's what I'm saying," Clyburn replied. "I have no idea what the speaker will do."

Pelosi said Wednesday after Democrats passed two articles of impeachment in a partisan vote that she wouldn't name impeachment managers or send the articles to the Senate until she was assured that the terms for a trial would be fair to Democrats.

"Why would the speaker of the House step into that without trying to determine exactly what the majority leader plans to do?" Clyburn said.

The Democratic leader said he is willing to wait "as long as it takes" to transmit the articles of impeachment to the Senate.

Democrats want to put 'train wreck' behind them

Former assistant U.S. Attorney Andrew C. McCarthy, in a National Review column Thursday, considered the question of whether or not Trump really has been impeached.

"If ... a trial cannot properly occur unless and until articles of impeachment have been transferred from the House to the Senate, and Speaker Pelosi won’t transfer them, has President Trump actually been impeached?"

McCarthy said it may be a "stupid question" but "we’re living in stupid times."

He said that when he first heard Pelosi was considering not delivering the two articles of impeachment voted by the House on Wednesday he thought it was a joke.

He noted Democrats have been "in a mad rush to impeach the president," insisting Trump is a clear and present threat to "continue" undermining elections.

But now the Democrats "want this train wreck in the rearview mirror ASAP."

Nevertheless, he said "we might as well ask: As long as the House withholds the impeachment articles from the Senate, has Trump been impeached?"

He noted that in the law, "there are many situations in which an outcome is known, but it is not a formal outcome until some ministerial act is taken."

"A grand jury can vote an indictment, for example, but the defendant is not considered indicted until the charges are filed with the clerk of the court," he wrote. "A defendant can be found guilty by a jury, but there is technically no conviction until the judgment is 'entered' by the trial court, usually months later when sentence is imposed."

And Congress has "similar ministerial acts of transference that must occur in order for legislation to pass. "

"Were that not the case, Speaker Pelosi would not be talking about delaying the transfer of impeachment articles."