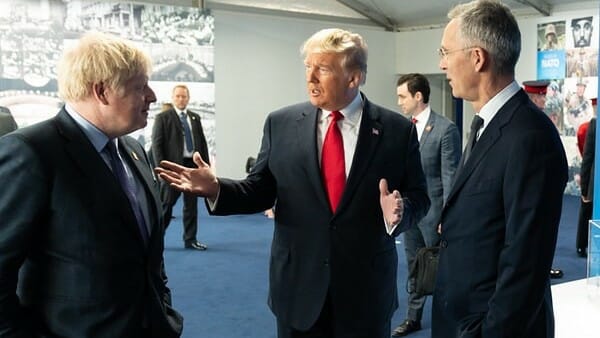 President Trump drew the attention of reporters to British Prime Minister Boris Johnson's historic victory in the United Kingdom's elections, suggesting it might forecast his own success in 2020.

"I want to congratulate Boris Johnson on a terrific victory. I think that might be a harbinger of what's to come in our country. It was last time," Trump said at the Oval Office on Friday.

Johnson has been regarded as an iconoclast who mirrors some of Trump's unconventional, anti-establishment proclivities.

The Hill noted that the Democratic presidential front-runner, former Vice President Joe Biden, saw the Labour Party's defeat as an indication that the Democrats shouldn't pick a far-left nominee.

"You're also going to see people saying, 'My god, Boris Johnson, who is kind of a physical and emotional clone of the president, is able to win,'" Biden said at an event in San Francisco.

Jonathan Chait, writing in the New Yorker, observed that many on the American left believed Labour Party leader Jeremy Corbyn would ride to victory and become their model for 2020.

Chait wrote that the British election was "a test of a widely articulated political theory that has important implications for American politics."

"That theory holds that Corbyn's populist left-wing platform is both necessary and sufficient in order to defeat the rising nationalist right."

But Corbyn's "crushing defeat is a decisive refutation."

Some analysts, Chait noted, detected parallels between the rise of Corbyn and of Bernie Sanders.

"Both built youth-oriented movements led by cadres of radical activists who openly set out to destroy and remake their parties," he said. "Both lost in somewhat close fashion, Sanders in 2016 and Corbyn the next year. And fervent supporters of both men treated their narrow defeats as quasi-victories, proof of victory just around the corner."

Washington Examiner columnist Hugo Gordon wrote that the "lesson Johnson offers to Democrats by drubbing Corbyn and Labour is that if you opt for cool, global, woke attitudinizing, and couple these to unrealistic and unpopular policies, you will be sent packing by voters."

He said Democrats "can keep pretending that mass illegal immigration is a wonderful thing and that America must adopt all the crazy -isms of the progressive Left."