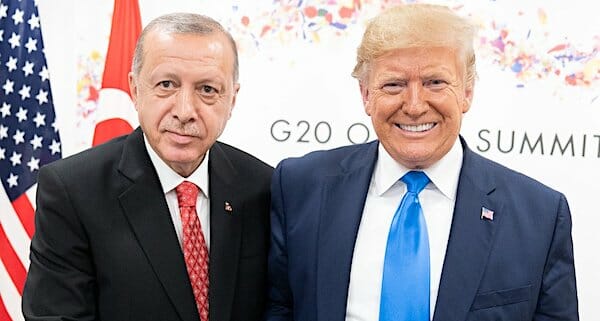 The president of Turkey, during an appearance at the Organization of Islamic Cooperation, lashed out at Israel with the wild blood libel claim, asserting the Middle East democracy executes "innocent girls, fathers, mothers, elderly people, children and young people" openly in its streets.

Breaking Israel News reported Recep Tayyip Erdogan "made extreme allegations against Israel while calling on the 57 member states with a collective population of over 1.8 billion Muslims to unite against Israel."

Erdogan's rant included: "Unfortunately, the situation in Palestine and in its inseparable part, Al-Quds, gets worse day by day. Israel’s attitude which knows no rights, law, justice or humanity continuously deepens the crisis in the region to the detriment of Muslims."

He continued: "We today face a Palestine on the streets of which innocent girls, fathers, mothers, elderly people, children, and young people are openly executed and mercilessly murdered by Israel. What is more, Western countries and – I regret to say – some Arab states practically encourage this brutality of Israel.

"We, as Turkey, most of the time feel ourselves left alone in our objections to the oppression in Al-Quds and Palestine," he said. "We will continue to uphold the truth and justice and stand by the oppressed at all costs. We will never stop defending the Al-Quds cause and the rights of the Palestinians or acting in solidarity with all the oppressed."

Blood libel against the Jews has been traced back to at least the Middle Ages and has been issued in places as high as the United Nations. One of the most common claims is that the Jews use the blood of children in matzos.

Such outlandish claims routinely appear in reports from enemies of Israel. Just months ago, a journalist from Jordan, along with the blood libel, asserted that only "thousands" of Jews died during the Holocaust and that Muslims suffered a much greater toll when they were driven out of Spain in the 15th century.

That came from Jordanian journalist Tahsin Al-Tal, writing at Gerasanews.com, who said Muslims should not be cheering for Spanish teams "as though the blood of the Arabs and Muslims has dried."

"[They do this] even though the screams of pain are still echoing as though the horrific scenes happened only a few months ago, not 500 years ago when the Islamic state in Andalusia collapsed after 800 years in which [Muslim] Spain was a beacon of knowledge, power and political [leadership] for the world," he wrote.

The comments were spotlighted by the Middle East Media Research Institute.

MEMRI said Al-Tal wrote "that there is no tangible evidence that the Jewish Holocaust actually happened, except for a few photos circulated by Jews, and that, even if it did happen, the number of Jewish victims probably did not exceed several thousand."

He said the Jews harness the Holocaust for the sake of their homeland and use the charge of anti-Semitism to justify their cruelty against the Palestinians and against Muslims and Christians in general.

"He also claimed that Jews perpetrated atrocities in the countries where they lived: 'killed children and monks and sucked their blood like bats,'" the report said.

Al-Tal claimed Jewish people "have used Semitism and anti-Semitism to justify their deeds and their barbarity, and to perpetrate depraved massacres not only in Palestine and the Arab countries but in [other] countries where they lived and where they intermingled with Christians and Muslims."

"They killed children and monks and sucked their blood like bats," he fretted.

The Investigative Project on Terrorism reported she was complaining against the Anti-Defamation League and one of its programs, which takes American police officers to Israel for weeklong seminars.

That, she charged, is fueling police brutality.

At the Islamic Society of North America's convention, she accused the ADL of being the "purveyor of Islamophobia against our community."

They have, she contended, "positioned themselves as somehow being part of the progressive movement."

Regarding Purim, he said: "This is the same holiday that the peoples of Europe hated and detested [and because of it] wished that the Jews would leave their countries so they could be saved from their wickedness. This is because the Jews who lived in Europe would always bake a large pastry on the occasion of the holiday, and everyone would eat it. However, this pastry was mixed with the blood of a victim they chose from among those who were not Jews."

He continued: "Most of the time the victim was a little boy, whom they would place in a perforated barrel full of spikes. The spikes would stab the body of the victim and his blood would flow into a special dish that collected it. After this, they would use it to prepare the pastry for the sacred holiday, and they would make sure that all the Jews in the area ate some of it. Because of this, the European peoples loathed the presence of the Jews in their countries and longed for them to leave. For they were the reason for every despicable deed, the mechanism for the commission of every crime, and the source of all social and economic corruption..."

The comments were captured by the Middle East Media Research Institute, which noted that Al-Lidawi previously had trotted out similar claims in his writings.