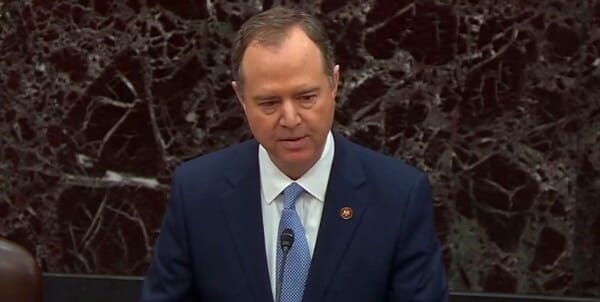 Rep. Adam Schiff, D-Calif., the lead impeachment manager, presents the articles of impeachment on the floor of the Senate on Jan. 16, 2020 (screenshot)

Two  major "deceptions" lie at the heart of the House Democrats' impeachment brief, contends Byron York in an analysis for the Washington Examiner.

Democrats say Trump must be "immediately" removed "to safeguard the 2020 U.S. election," contending he was the knowing beneficiary of Russian help in the 2016 election and plans to do it again.

But in making their argument, argues York, Democrats make two critical mischaracterizations about Trump, Republicans and 2016.

"One is flat-out wrong, while the other is misleading," he writes.

The misleading mischaracterization in the Democratic brief is the assertion that, in 2016, Trump "welcomed Russia's election interference."

York contends that neither mischaracterization in the Democratic brief is a mistake.

"Democratic prosecutors know full well what actually happened," he said. "But the mischaracterizations are necessary to build the case against the president, to show that he had corrupt motives in the Ukraine matter."

In a 110-page response, President Trump's legal team called the House's impeachment case "flimsy" and a "dangerous perversion of the Constitution."

The charges of abuse of power and obstruction of Congress do not amount to impeachable offenses, the White House team contends.

Regarding Russia, York points out that the White House is not saying that Russia did not interfere. The first congressional probe, by the House Intelligence Committee under then-chairman Devin Nunes, concluded as much. The theory posited by the White House, he says, is that "in addition to Russian interference, some people in Ukraine, including some government officials, also tried to influence the U.S. election."

Among the evidence cited by supporters of the president:

"None of that is definitive, but it is also not debunked," York writes. "And it is not a denial of Russian interference but a recognition that in addition to that interference, some in Ukraine also tried to influence the election."

The brief quotes special counsel Robert Mueller's report that the Trump campaign welcomed Russian help because it "expected it would benefit electorally from information stolen and released through Russian efforts."

York noted some of the headlines:

"He was welcoming something that everyone else was welcoming, too," York says. "And now, in retrospect, that is a terrible offense, part of the foundation for removing the president from office?"