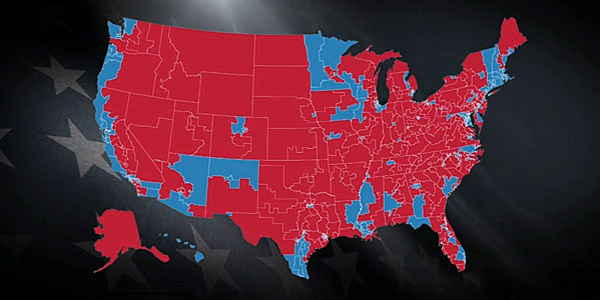 Projected changes in the allocation of congressional seats following the 2020 Census could give Republicans an additional six votes in the Electoral College, according to an analysis by Election Data Services.

"Taken together, the changes on the electoral map would equal an even bigger win for a future GOP nominee who could follow Donald Trump’s 2016 electoral path to victory. That Republican would capture 309 electoral votes, 80 more votes than the Democrats 229," the report said.

NBC said the estimates are based on how states voted in 2016.

"In the forecasted post-2020 world, Texas and Florida together would have 72 electoral votes. Imagine a quarter of the electoral votes needed to win the White House in just two hotly contested states. That's not just a different electoral map, it's a different political world," the report said.

Jenna Ellis, senior legal analyst for the Trump 2020 campaign, according to Houston's KTRH radio, said, "This is looking to benefit Republicans only because of how the landscape has changed,"

The Blaze reported: "Progressives have long criticized the presence of the Electoral College as a countermeasure to pure majoritarianism. In a July tweet, Democrat Bernie Sanders declared. 'Abolish the Electoral College.' Additionally, in August, Rep. Alexandria Ocasio-Cortez (D-N.Y.) called the system an inherently racist 'scam.'"

But Ellis explained the Electoral College is a safeguard against the tyranny of the majority.

"The founding fathers very wisely embedded a caution in making sure we have representation, through the Electoral College, from the entire United States of America. And that it wasn't a pure, strict Democracy," she said. "It wasn't just a popular vote."