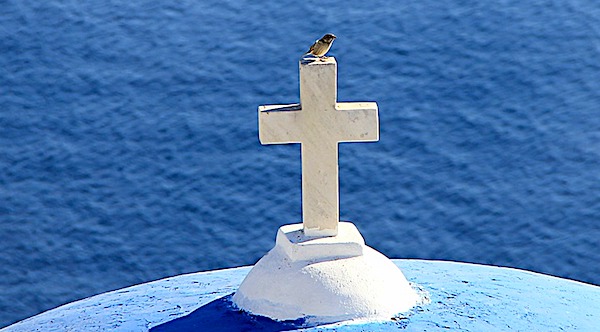 There were some 3,000 Christian churches and other sites linked to the faith attacked during 2019 across Europe, including a huge spike in incidents in France and Germany that coincide with the "recent mass immigration from the Muslim world, according to a new report.

The documentation is from Soeren Kern, a senior fellow at the New York-based Gatestone Institute.

It is "anti-Christian hostility" that is sweeping across Western Europe, where attacks were reported multiple times daily, he explained.

"Gatestone Institute reviewed thousands of newspaper reports, police blotters, parliamentary inquiries, social media posts and specialized blogs from Britain, France, Germany, Ireland, Italy and Spain. The research shows … that roughly 3,000 Christian churches, schools, cemeteries and monuments were vandalized, looted or defaced in Europe during 2019 — which is on track to becoming a record year for anti-Christian sacrilege on the continent," the report said.

It was in France and Germany that "the spike in anti-Christian attacks dovetails with the recent mass immigration from the Muslim world," he reported.

But the report pointed out, "The lack of official statistics on perpetrators and motives makes it impossible to know precisely how many attacks can be attributed to Muslim anti-Christianism or the jihadist cause."

In France, churches, schools, cemeteries and monuments were "vandalized, desecrated and burned at an average rate of three per day." For Germany, it was two per day.

The report said, "The issue of anti-Christian vandalism was rarely reported by the European media until February 2019, when vandals attacked nine churches within the space of two weeks. The issue made headlines again in April 2019, when a suspicious fire gutted the iconic Notre Dame Cathedral in Paris. Since then, however, the European media are once again shrouding facts in silence."

"We are witnessing the convergence of laicism – conceived as secularism, which relegates the faithful only to the private sphere and where every religious denomination is banal or stigmatized – with the overwhelming emergence of Islam, which attacks the infidels and those who reject the Quran," Dominique Rey, bishop of Fréjus-Toulon, in an interview with the Italian magazine Il Timone, August 5, 2019, according to the Gatestone report.

The report said most attacks are acts of vandalism, targeting objects and symbols considered sacred by Christians.

"From a strictly legal perspective, such crimes are difficult to prosecute as hate crimes: according to the laws of most European countries, prosecutors must prove that the vandalism was specifically motivated by an animosity toward Christians or Christianity," the report said.

Others involve theft, where church bells, sacred metal objects and other items have been targeted.

"In Britain, nearly half of all churches on the National Historical List for England have been ransacked. Many of the crimes are being attributed to highly organized gangs which use drones, online maps and global positioning systems first to identify their targets through aerial footage and then plot their own escape routes," the report said.

Then there are politics.

"Such attacks include defacing churches and religious symbols with political graffiti, much of it anarchist or feminist in nature. In Geneva, Switzerland, for instance, the iconic International Monument to the Protestant Reformation, also known as the Reformation Wall, was vandalized with multi-colored paint forming a rainbow, a symbol of the LGBT groups," the report said.

And there is obviously "a deep-seated hostility toward Christianity."

"Such attacks include smearing feces on representations of Jesus Christ or statues of Mary, the mother of Jesus. Other attacks involve the defilement or theft of communion wafers, which Roman Catholics believe are transformed into the real presence of Christ when consecrated. Some of these attacks may be the work of Satanists, who use the consecrated host in a ritual called the Black Mass," it said.

For the Gatestone's detailed compilation of attacks on Christianity, click here.