Following the leak of John Bolton's upcoming book, Sen. Susan Collins, R-Maine, has joined Sen. Mitt Romney, R-Utah, as a possible vote for calling on the former national security adviser to testify in the Senate impeachment trial of President Trump.

"The reports about Bolton's book strengthen the case for witnesses and have prompted a number of conversations among my colleagues," Collins said in a statement Monday.

The New York Times cited an unpublished Bolton manuscript saying that Trump told him he wanted to condition security aid to Ukraine on investigations into Democrats, including former Vice President Joe Biden and his son, Hunter Biden.

Fifty-one of the 53 Republicans in the Senate would be needed to prevent witness testimony and possibly conclude the case by Friday, assuming no Democrats join them. A supermajority of 67 votes is required to remove a president from office.

Romney told reporters the Times story makes it "increasingly apparent it would be important to hear from John Bolton."

"I, of course, will make a final decision on witnesses after we've heard from not only the prosecution but also the defense," he said. "But I think at this stage it's pretty fair to say that John Bolton has a relevant testimony to provide to those of us who are sitting in impartial justice."

Romney said earlier this month he supported "the Clinton impeachment model," which is a vote on witnesses later.

"But as to which witnesses I’d want to hear from, and so forth, that’s something which I’m open to until after the opening arguments," he said.

Other Republican senators Democrats are targeting to support witnesses are Lisa Murkowski of Alaska, Cory Gardner of Colorado and Lamar Alexander of Tennessee. 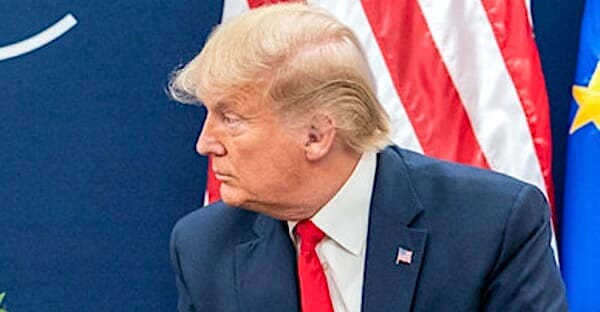 "I NEVER told John Bolton that the aid to Ukraine was tied to investigations into Democrats, including the Bidens," the president said. "In fact, he never complained about this at the time of his very public termination. If John Bolton said this, it was only to sell a book.

"With that being said, the transcripts of my calls with President Zelensky are all the proof that is needed, in addition to the fact that President Zelensky & the Foreign Minister of Ukraine said there was no pressure and no problems."

In addition, Trump said, he met with Zelensky at the United Nations, although the Democrats denied that fact.

Trump further argued he "released the military aid to Ukraine without any conditions or investigations -- and far ahead of schedule."

"I also allowed Ukraine to purchase Javelin anti-tank missiles. My Administration has done far more than the previous Administration," he said.

McCarthy, who believes Trump should not have been impeached, has been contending the president's team "should stop claiming there was no quid pro quo conditioning the defense aid Congress had authorized for Ukraine on Kyiv’s conducting of investigations the president wanted."

"If the Trump defense had taken the position that we should assume for argument's sake that the president put pressure on Ukraine but, in the end, he folded, the Bolton revelation would be a big nothing," McCarthy wrote The president’s team could have said it is just more of what we already knew," he wrote in a column for National Review.

"They could have stayed on the ground where they are strongest: Nothing happened. All foreign policy involves pressure and quid pro quo. There is a good-faith basis to suspect the Bidens were involved in corrupt self-dealing," he writes.

In addition, the White House could have argued it's "ridiculous to suggest that Ukraine’s defense, let alone American national security, was in any way compromised."

"President Trump has done much more to protect Ukraine from Russia than President Obama and the Democrats did — indeed, some of the Democratic House impeachment managers voted against the very aid to Ukraine, the brief, inconsequential withholding of which they now feign outrage about."