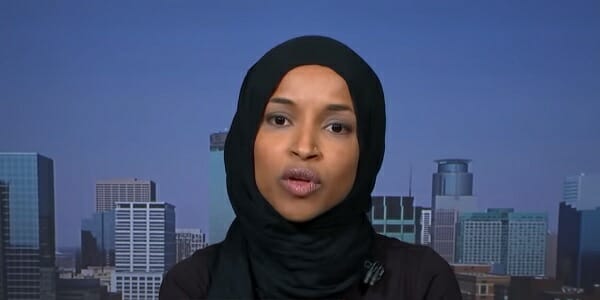 The FBI is reviewing evidence that Omar married her brother in an immigration-fraud scheme. The New York Post reported last week two FBI agents met in mid-October in Minnesota with a concerned party who handed over documents regarding Omar's 2009 marriage to Ahmed Nur Said Elmi, according to a source with knowledge of the meeting.

Investigative reporter David Steinberg, who has reported over the last two years compelling evidence that Elmi is her brother, reported Jan. 16 that the FBI is among three agencies reviewing the case. The others are the Department of Education Office of Inspector General and the Immigration and Customs Enforcement agency.

The $215,000 paid to Mynett's group amounts to 53% of the total disbursements from the campaign during the fourth quarter of 2019.

Mynett's former wife, Dr. Beth Mynett, said in divorce papers filed last year that her husband was "romantically involved with and in love with another woman, Ilhan Omar."

"By way of example, days prior to defendant's devastating and shocking declaration of love for Rep. Omar and admission of their affair, he and Rep. Omar took the parties' son to dinner to formally meet for the first time at the family's favorite neighborhood restaurant while plaintiff was out of town," the papers said. "Rep. Omar gave the parties' son a gift and the defendant later brought her back inside the family's home."

Omar has evaded questions about the alleged affair.

DailyMail.com, which published photos of the two together, reported last year that Omar and Mynett are living together.

The Washington Free Beacon also spotted the two together last November at the Mandarin Oriental hotel in Washington, D.C., during a secretive gathering of the elite Democracy Alliance.

Omar repeatedly has called the allegations that she married her brother "disgusting lies."

In October, she filed for divorce from husband Ahmed Hirsi after the Post reported she was accused of having an affair with Mynett.

Hirsi, the father of Omar's three children, remarried just 37 days after their divorce was finalized in November.

Records show Omar and Hirsi were engaged in 2002 and united in a Muslim ceremony but never were legally married. They had two children then "split" in 2008. The next year, Omar married Elmi.

Allegations that Elmi is Omar's brother emerged in 2016 in a since-deleted post to the Somali Spot message board by a user named AbdiJohnson. Power Line blogger Scott Johnson reported the claim, which later was repeated by President Trump.

However, Omar didn't divorce Elmi until 2017.

As WND reported, Steinberg, Power Line's Johnson and investigative reporter Preya Samsundar have published over the past three years substantial evidence that Omar married her brother to defraud U.S. immigration and perjured herself eight times in her divorce statement.

A Minnesota state agency has fined her for filing joint tax returns with Hirsi while she was legally married to Elmi.

"The evidence is overwhelming Rep. Omar may have violated the law and House rules," said Judicial Watch President Tom Fitton in July. "The House of Representatives must urgently investigate and resolve the serious allegations of wrongdoing by Rep. Omar."