"So what if Trump wants war, knows this leads to war and needs the distraction? Real question is, will those with congressional authority step in and stop him? I know I will."

And, not to be undone in her hatred not just for Trump, the most pro-Israel and pro-Jewish president in American history, Rep. Rashida Tlaib could not resist also weighing in. This low-class and violent Jew hater having vowed to impeach the "MF," this piece of work who physically attacked my Jewish activist client Laura Loomer at a campaign event in 2018 with Omar, earning her a lawsuit for assault and battery, which I had filed, wasted no time attacking Trump:

"We cannot stay silent as this lawless President recklessly moves us closer to yet another unnecessary war that puts innocent lives at risk at home & across the globe. Congress alone has the authority to declare war, & we say no to war with Iran."

Of course no war, Omar and Tlaib! Again you side with your Muslim brothers and sisters in Iran over the rest of us! No surprise here. How could you and your fellow Jew and Christian haters in Congress resist! But among your own Muslim creed, this would come as no surprise. What will be more interesting to watch in the next days are the leftist Jews in Congress, including those like self-hating Jew Bernie Sanders, the Marxian who not only masks his Jewishness with a contrived non-Jewish family name, but also revels in his support from the likes of Muslims Omar, Tlaib and Linda Sarsour. Sure enough, Sanders, joining his fellow Jew haters by tweeting this:

"Trump's dangerous escalation brings us closer to another disastrous war in the Middle East that could cost countless lives and trillions more dollars. Trump promised to end endless wars, but this action puts us on a path to another one."

Sanders is joined by the despicable likes of Reps. Adam Schiff, Jerrold Nadler, Elliot Engel and Sens. Schumer and Blumenthal and the rest of the leftist Jewish cadre in Congress foaming at the mouth in anticipation of Trump's impeachment trial. These disciples of self-hating Jews Karl Marx and Trotsky have been and will continue to increasingly inflame those virulent anti-Semites who have been carrying out hate-crime attacks not just in New York City, but around the nation and the globe.

The undisputed fact is that Soleimani was the enemy of not just the Jewish state, Israel, but all Jews. Iran, more than any other Muslim country, has circled Israel with surrogate terrorists forces, such as Hamas and Hezbollah, with the vowed objective to annihilate the Jewish people. Israel is just for starters.

As you know, I am of Jewish origin and proud of it. In addition to my Jewish roots, I am also a Christian, Christ having personally come to me on at least two occasions during difficult periods in my life, one of which you can read about in my autobiography, "Whores: Why and How I Came to Fight the Establishment!," which can still be purchased on Amazon.com and BarnesandNoble.com.

As a proud Jew and a proud Christian – indeed, Jesus was in effect both as well – I have come to see the destructive Jewish left in a vein similar to our Savior, who fought against the corrupt high priests and the Romans, both of which wanted to see him dead. Jesus posed a threat to them, as he was selling a superior product; indeed the Divine Providence of the real God, the Father. Can there be any doubt that the likes of Sanders, Schumer, Schiff, Nadler and Engel are akin to these corrupt high priests, despicable leaders who selfishly served and serve their own interests rather than the interests of the people?

The Jewish people do not bear responsibility for the crucifixion of our Savior, only a corrupt few do. While not having the capability of crucifying Trump – although the aforementioned would obviously like to if they had their druthers – and without equating The Donald to Jesus, there is a lot of symmetry here.

The sight of these leftist Jews recently on center stage in Congress announcing the impeachment of the president has undoubtedly caught the attention of traditional anti-Semites and created a false justification for their heinous acts. Couple this with neo-Nazis, radical-black Muslims and Jew haters of all stripes, and one can see that more anti-Semitic violence is inevitable.

As I have also said many times, worldwide Jewry should not be tarred by the likes of the American Jewish left in Congress and the leftist Fake News media. We are overwhelmingly not like that. But this regrettably is how many in our country in particular are perceiving things these days. Just peruse the embedded photograph below, and, save for that hateful witch Speaker Nancy Pelosi and radical-black Maxine Waters, look at this line-up of the modern-day high priests: 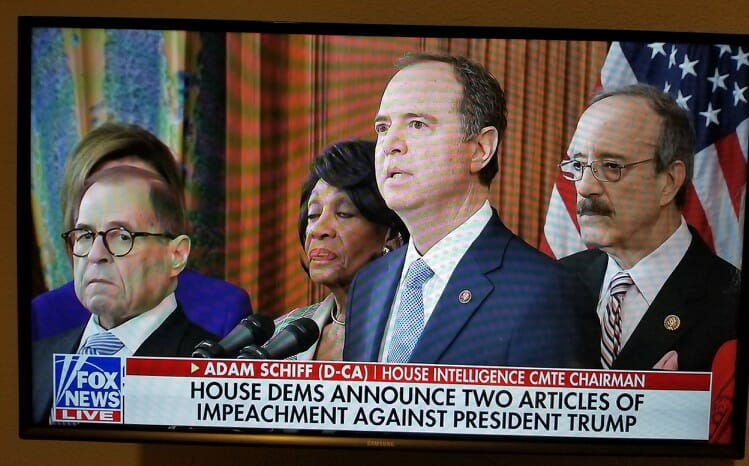 Because I am not just embarrassed but offended by the Jewish left, who by and large also support Palestinian extremism over their own people – and you can look to the antics and pronouncements of Jewish left in Hollywood these days as a barometer of this – I have created through Freedom Watch a Coalition of the Jewish Right to combat from within the forces of the Jewish left who are not just destructive of our president, but the nation and Jewry as a whole.

Fellow Christians are also much more than welcome to join, and indeed the Christian right is far more supportive of Jewish interests than is its counterpart on the Jewish left.

If Jews themselves are to play a central role in combating anti-Semitism, then we must keep our own house in order; that is the order espoused and enforced by Moses, King David and yes, that Rabbi who died for our sins after one last supper on Passover.

Go to www.freedomwatchusa.org and join and support our Coalition of the Jewish Right. Let it be your New Year's pledge to do your part to eradicate both anti-Semitism and anti-Christian hate crimes here and around the world. One way to reduce anti-Semitism is to cut the Jewish left down to size, peacefully and legally. Please join me in this crucial endeavor!

Larry Klayman
Larry Klayman is a former Justice Department prosecutor and the founder of Judicial Watch and Freedom Watch. His latest book is "It Takes A Revolution: Forget the Scandal Industry!"
@freedomwatchweb
Capitol revolt not just about a fraudulent election
The New Year's Revolution!
If it's good enough for Jesus, it's good enough for me
Larry Klayman is (nearly) always right!
Don't pin your hopes on SCOTUS
See more...