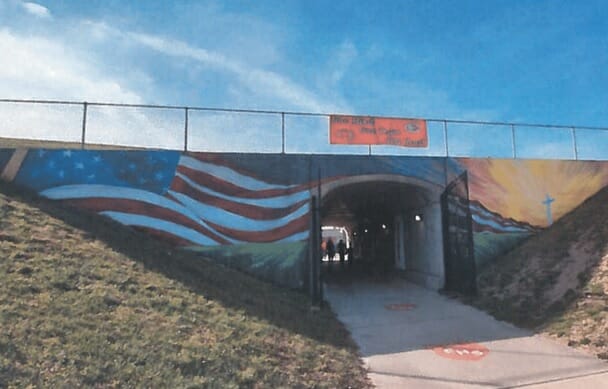 An organization of atheists and others who oppose religion in public life is demanding that an Illinois town remove a cross from a mural memorializing a famous white 9/11 cross.

But the non-profit First Liberty Institute is advising officials in Effingham, Illinois, to ignore the complaint by the Freedom from Religion Foundation, because the image is protected by U.S. Supreme Court precedent.

The Washington Examiner reported the Wisconsin-based FFRF urged Effingham officials to erase a cross depicted in a mural on an overpass near the town's high school. The image also includes an American flag.

The atheist group complained that a mural "that depicts nothing except a Latin cross alongside the American flag sends a clear message: that patriotism and religiosity are interrelated."

First Liberty responded with a letter to Effingham Mayor Mike Schutzbach arguing the mural is legal and protected by the Supreme Court's decision on the American Legion cross in Bladensburg, Maryland.

"The Cross at the Crossroads' two decades of prominence as part of Effingham surely has established it as just such a symbol and 'part of the community,'" said First Liberty.

The cross in Effingham is a "recognized symbol in and of the city and an unmistakable community hallmark," said Roger Byron, senior counsel to First Liberty.

"Formally dedicated days after the attacks of September 11, the Cross depicts Effingham's tradition of patriotism and unity," he said. "There is little wonder it was included in a mural on city property. A community mural commemorating such an established land mark should carry that same 'special significance.'"

Byron said the argument to remove the cross was "markedly light on law."

The city, he advised, should disregard the complaint.

Otherwise, Effingham could be perceived as being "hostile" to such symbols, he noted.