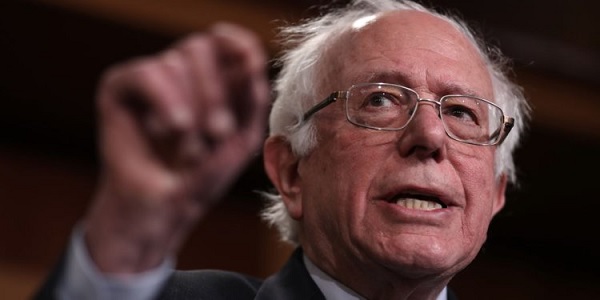 A staffer for Sen. Bernie Sanders' presidential campaign -- admitting his campaign attracts anarchists, Marxists and other "truly radical people" -- called for a "militant" peoples' movement to "strip power" from capitalists, according to a Project Veritas report released Tuesday.

"I've canvassed with someone whose an anarchist, and with someone who's a Marxist/Leninist, so we attract radical, truly radical people in the campaign, but obviously that’s not outward facing," he said.

The video is the fourth in Project Veritas' #Expose2020 series. Last week, another paid Sanders field organizer in South Carolina said he was preparing for an armed socialist revolution, praised the Soviet Union and advocated sending Republicans to "re-education camps." Previously, Project Veritas released video of Sanders Iowa field organizer Kyle Jurek advocating Soviet-style gulags to "de-Nazify" Trump supporters and acknowledging he's among four organizers in his office who could be described as a Marxist or a communist. Jurek said Soviet-style gulags would be a good way to carry out necessary "re-education" of Donald Trump supporters if Sanders becomes president. He also warned that if the Democratic Party doesn't nominate Sanders, the city hosting the convention this summer, Milwaukee, will "burn."

The Sanders campaign did not respond to a WND request for comment.

In the latest video, the South Carolina field organizer Baird called for the federal government to institutionalize a militant labor movement to remove power from "capitalists."

"We would need a federal government and labor union movement that is working together to strip power away from capitalists and preferably directing violence toward property," he said.

Baird added, however, that such a development will come through the "work" of the people, noting "China today is not what Mao envisioned."

"It's gonna take militancy ... like a militant labor movement that’s willing to ... strike, and if necessary, you know, just destroy property and things like that," he said.

According to Baird, Sanders says he wants "this mass movement going after the election."

"Like, if we have Bernie in the White House, we're going to have, a real plan for dual power, where we'll have the presidency and we'll have a mass movement, right alongside it, that's like going to be like institutionalized and supported. ... and I’d like to participate in it."

'We don't have to kill them'

Baird said Sanders plans to "break up Google, YouTube, Facebook, nationalize these things, then that would be a huge thing forward so far as education stuff goes."

"We don't have to kill them, that's my feeling. I think it's damaging to the soul, but um, there were plenty of excesses in 1917 (Russian Revolution) I would hope to avoid," he said.

"Labor, I think that's a big source of power for us, and just try to gain as much leverage and power in the short time that we have."

Daniel Taylor, another Sanders organizer in South Carolina, said: "We don't want to scare people off. You first have to feel it out before you get into the crazy stuff. ... You know we were talking about more extreme organizations like Antifa, you were talking about, Yellow Vests, all that, but we're kinda keeping that on the back-burner for now."

The Iowa filed organizer Jurek was asked his honest opinion of where Sanders stands politically.

"I think he's a legit socialist masquerading as a democratic socialist," Jurek said.

"I think that a lot of ... the things that he's suggesting in moving forward takes us further than democratic socialism."