Overheard convo between two Republican Senators who only watch Fox News. "is this stuff real? I haven't heard any of this before. I thought it was all about a server. If half the stuff Schiff is saying is true, we're up shit's creek. Hope the White House has exculpatory evidence

Former Clinton White House press secretary Joe Lockhart lit up Twitter when he claimed to have overheard two panicked, Fox News-watching Republican senators confessing they had no idea how powerful the Democrats case is against President Trump.

The senators said, according to Lockhart: "If half the stuff Schiff is saying is true, we're up sh**'s creek. Hope the White House has exculpatory evidence." 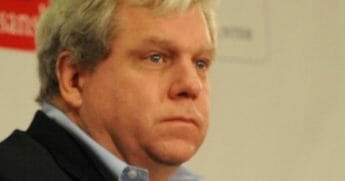 But after thousands of retweets and likes, Lockhart acknowledged in subsequent tweets that he made it up, the Washington Free Beacon reported.

Calling it "satire," Lockhart did not delete the misleading tweet even as it went viral.

While his original tweet clearly was taken seriously, he ridiculed critics.

"Seems like I poked the bear today," he wrote. "The purveyors of Pizzagate and the Seth Rich conspiracy are lecturing me on honesty. I told a joke, you guys are a destructive joke that is killing our democracy. Other than that, hope you're enjoying the trial and have a nice evening."

The Free Beacon noted that CNN reporters on the beats of media and "disinformation" have insisted satire is no excuse for spreading "fake news," particularly if it can be misconstrued.

Twitter user Donie O'Sullivan pointed out that Lockhart's tweet got the same number of engagements the top New York Times and CNN stories on Facebook had over the past week.

Cindy Otis wrote on Twitter, "A lot of people sharing this 'satirical' story on Facebook don't know it is satire."

Lockhart sparked controversy Tuesday when he said Sen. Ted Cruz, R, Texas, should face prison time for tweeting while he was on the Senate floor.

However, the Free Beacon pointed out, the former public relations executive apparently didn't take into account the fact that senators have staffers who handle their social media accounts. And senators cannot be imprisoned for breaking Senate floor rules.