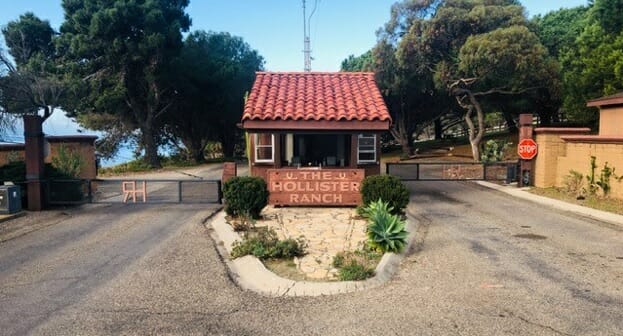 The owners of the exotic 14,400-acre Hollister Ranch on the coast of California are suing the state for a host of alleged constitutional violations after lawmakers adopted a statute that gives the state free access to the land.

Further, the lawmakers are claiming the right to punish anyone who "obstructs" or "impedes" that access.

The Pacific Legal Foundation filed the complaint in U.S. District Court for the Central District.

Explained PLF: "The law at issue, AB 1680, calls for an update to older state plans to create a public access way on private land on the 14,400-acre Hollister Ranch, which borders the Pacific coast. This general goal represents an outgrowth of 2018 legislation vetoed by Governor Jerry Brown, who recommended a sensible and fiscally responsible Ranch access update. Hollister Ranch did not oppose early versions of AB 1680 that sought to encourage an expanded public access plan and that set out reasonable deadlines for action."

However, lawmakers amended the bill with "unexpected provisions that represent an overreach of the state's authority."

The provisions also "run afoul of constitutional protections of due process and free speech and constitutional prohibitions of illegal search and seizure and the taking of private property without compensation," PLF said.

For example, the state lawmakers approved allowing state agencies "to enter Hollister Ranch and to search and use all common areas, including those with employee housing, barns, and other structures, for the purpose of gathering data to be used to create public access across ranch lands."

And the lawmakers demanded that "any 'action' taken by ranch owners or employees to 'impede' or 'delay' or 'obstruct' the state's search of the ranch or other efforts to create a public access plan on ranch land is a Coastal Act violation subject to tens of thousands of dollars in fines."

PLF said the ranch's concerns with the provisions "were made clear to the bill author and to the Legislature immediately after they became public, and to the governor before he signed the bill, and in editorials and communications with the affected state agencies, but they were not heeded."

"The California Coastal Commission has spent decades trying to turn private ranch lands into a public area without adequately respecting the private rights of those who live there, or its special and historical character as an area preserved from public damage and set aside for ranching," said David Breemer, a senior attorney at Pacific Legal Foundation, which is representing, pro bono, the Hollister Ranch Owners' Association and its 133 members.

"There is a right way and wrong way to deal with access issues. Requiring property owners to submit to searches of property without notice or limits and threatening them with fines for speaking out or acting in other lawful ways to defend their private property is the wrong way. If California uses these overreaching means at Hollister Ranch in pursuit of its access goals, no one’s property is safe."

The unique property was a cattle ranch in the late 1800s. Now it is divided into 136 lots of 100 acres or more, owned by individuals, and many have the residences there. But the acreage allowed for improvements such as homes and garages is limited to two acres generally, meaning most of the land still is open range and still operates as a cattle ranch.

It produces about half a million pounds of beef a year.

It contains more than eight miles of the Pacific Coast. Access to to the coast is limited because of the nature of the land, although the state owns the seashore beyond the high tide mark and visitors have access by boat.

Ranch owners were amenable to setting up road access to beach areas, until the lawmakers  took the rights to the ranch's private land.

"The suit seeks to clarify the parties' rights and obligations and to enjoin the ongoing and unconstitutional search and taking of private property," the complaint states. "It further seeks to halt enforcement of a provision that imposes severe penalties without giving affected Ranch owners and employees adequate prior notice of the type of 'actions' that trigger Coastal Act penalties."

The case charges the state is violating the Fourth Amendment, Due Process, the First Amendment and the Fifth Amendment. It seeks a judgment that the state's demands are not enforceable.

A separate legal case developed recently over land at the ranch. One parcel owner asked for a permit to build a swimming pool on his property, and the California Coastal Commission refused, unless the ranch provided public beach access.

The swimming pool was proposed for a parcel a mile from the beach, and PLF also is fighting that battle.

The Wall family's request had been approved by Santa Barbara County, but the state agency refused to cooperate.