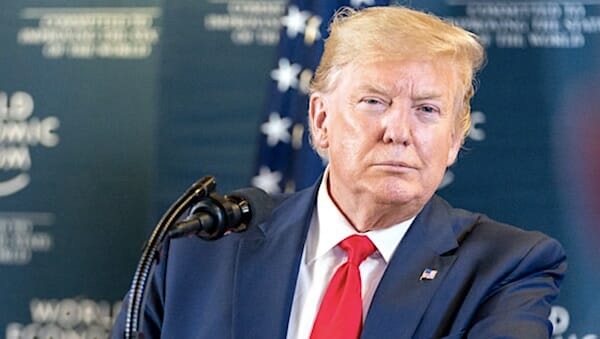 Take, for example, the claim that President Trump's lawyers's reference to the "33 days" that the House took to transmit the two articles of impeachment to the Senate was a "secret code" to reach out to evangelicals.

33 is an important number to evangelicals. Jesus is said to have been 33 when he was crucified https://t.co/BmBklQtN75

"33 is an important number to evangelicals. Jesus is said to have been 33 when he was crucified," he wrote on Twitter.

He was responding to CNN reporter Daniel Dale's "factchecking": "No, Republicans weren't banned from the SCIF. No, Trump's lawyer wasn't banned from Judiciary. No, Democrats didn't take '33 days' to transmit the articles. My fact check of false claims Trump's lawyers made yesterday on the Senate floor:"

No, Republicans weren't banned from the SCIF. No, Trump's lawyer wasn't banned from Judiciary. No, Democrats didn't take "33 days" to transmit the articles.

My fact check of false claims Trump's lawyers made yesterday on the Senate floor: https://t.co/Fer7rfLcWE

He continued: "In additional to these three false claims, a Trump lawyer also suggested – in language too confusing for me to call the claim false, so I went with misleading – that Mueller's report concluded that there was 'no obstruction.' It explicitly did not come to that conclusion."

But the comment about the age of Jesus triggered a gusher of tweets.

Twitchy, which aggregates news on Twitter, said: "'Dude, you cracked the code'! LA Times' David Lazarus may have just stumbled upon a secret signal from Trump's lawyers to Evangelicals."

"This is big, you guys," Twitchy commented.

Twitter user Tyler Petersen joined the conversation, pointing out "55378008 is an important number to middle schools. When you type it on a calculator and hold it upside down, it looks like BOOBLESS."

Twitter user Kirk Merritt wondered, "What happens when you play the record backwards?"

The discussion moved even further into the weeds.

"33 was Larry Bird's  number. Larry Bird had a mustache. John Bolton has a mustache. This is Trump lawyers way of threatening Bolton's life if he testifies," joked Jasper Parks.

Yet another added, "This will go in the books alongside MSNBC's body language expert and the time that CNN guest said lowering the flags to half-staff on Aug. 8 is secret code for 'Heil Hitler.'"

Jessica Fletcher said: "David Lazarus' last name is Lazarus. Lazarus is the name of the man Jesus raised from the dead. David Lazarus is a Russian asset."

Jarvis Good explained: "That seems arbitrary. I think the real reason is that if you look at the '3' button on a standard keyboard and then go 3 keys to the right (i.e. Trump is far right) and 3 keys down (where Trump is taking us), you land on the H key. 33 = HH or 'Heil Hitler." It's a dogwhistle."

Bekah said: "Bono used it in a song lyric once, so obviously that was his way of supporting Trump decades before his election. Bono is a new age Nostradamus."

Neal Hyde said: "33 is also 3x11, which as everyone knows, is Satan's favorite mathematical equation after the 1040 form."

Kyle Caesar said "33 backwards looks like EE and we all know what that means."

Brad Owens wrote: "If you rearrange the letters in 'David Lazarus" you get "Lada Zarusvid" which is, unsurprisingly, less insane AND more meaningful than an average David Lazarus tweet."

Some tried to insert common sense.

"Been a Christian my entire life and 33 has never been an important number to anything. Take the colander off your head," said Twitter user Brown Man Speak.

SJG$ said, "Insanity is very sad, my thoughts and prayers are with you."