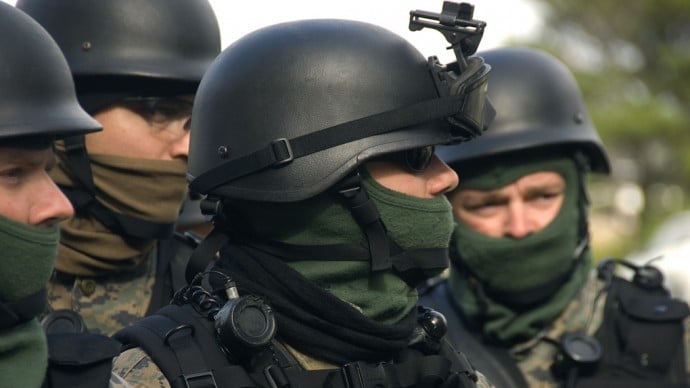 Police officers in Caldwell, Idaho, destroyed an empty home in search of a man who wasn't there.

Now the Institute for Justice is asking the U.S. Supreme Court to order compensation for the woman who lived there.

A petition was filed with the high court asking for a new ruling in a case brought by Shaniz West.

"If you tell police they can go into your home, does that mean they can also legally stand outside and pepper it with shotgun-fired tear gas grenades – destroying everything inside?" the institute is asking.

"Shaniz's nightmare started when she stopped home with her children in tow one afternoon in 2014 to find her house surrounded by five local police officers. They told her they were looking for her ex-boyfriend, who was wanted on firearms charges. Shaniz said she didn't think he was in her home – he certainly wasn’t supposed to be – but she said that the officers could go in to see for themselves," the institute said.

"But the officers did not even try keys she gave them: Instead, they called in the local SWAT team and laid siege to the house, bombarding it from the outside with tear-gas grenades. When it was all over, Shaniz's home and all her possessions were destroyed and (just as Shaniz had said) the ex-boyfriend was nowhere to be found. Instead, the police had spent half a day bombarding and besieging a house that was empty except for Shaniz's dog, Blue."

With Shaniz left homeless, the officers said the destruction of the home had nothing to do with them and she could go somewhere else for help.

"Amazingly, the judge bought the police’s defense," the institute said.

IJ said it also is launching a new project "to ask the courts to reexamine doctrines giving government officials broad immunity from accountability."

"Government officials are not above the law, and if citizens must follow the law, the government must follow the Constitution – that includes being held accountable for violating it," said IJ lawyer Josh Windham.

The case is over qualified immunity, a creation of the Supreme Court in a 1982 decision.

"No judge has ever ruled that what these officials did to Shaniz was legal," explained IJ Senior Attorney Robert McNamara. "After all, anybody who has ever thrown a dinner party understands that an invitation to go inside your home is not the same thing as an invitation to destroy it. But under qualified immunity, courts say it doesn't matter whether a reasonable person would have thought they were acting legally. It only matters whether a court has already decided that an official who did exactly the same thing in exactly the same circumstances violated the law. If your exact case hasn't come up before, you're out of luck."

The 9th U.S. Circuit Court of Appeals, in Shaniz's case, reached no conclusion.

It's just one of several similar cases IJ is fighting.

The organization also is defending a Denver-area family whose home was destroyed by police searching for a shoplifting suspect.

Last fall, a three-judge panel of the U.S. Court of Appeals for the 10th Circuit ruled against Leo and Alfonsia Lech of Greenwood Village. The panel said that as long as the government uses its "police power" to destroy property, it cannot be required to provide compensation under the U.S. Constitution’s Takings Clause.

WND previously reported the demolition happened in 2015 when Greenwood Village police responded to a shoplifting report at a Walmart. The suspect, Jonathan Seacat, fled into the Lechs' home. Police used a boom ram on an armored vehicle to destroy the walls of the house and expose the shoplifting suspect to snipers.

The home was left uninhabitable. The city condemned it, and the Lechs were forced to rebuild from the ground up.