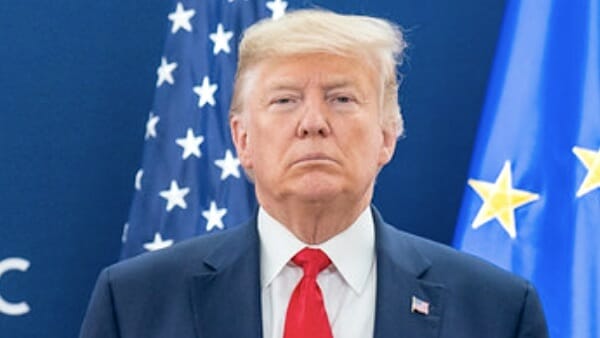 A recognized expert on the Constitution, Harvard law professor Alan Dershowitz, disputes the General Accountability Office's opinion that President Trump's delay of defense aid to Ukraine was a crime.

"The Constitution allocates to the president sole authority over foreign policy (short of declaring war or signing a treaty). It does not permit Congress to substitute its foreign policy preferences for those of the president," he argued in a column for the Gatestone Institute, where he is a fellow.

The GAO contended the $214 million allocated to the Department of Defense for security assistance was appropriated by Congress, and the administration, therefore, had no right to hold back the funds because it disagreed with its allocation.

"Faithful execution of the law does not permit the president to substitute his own policy priorities for those that Congress has enacted into law," said the GAO, an independent, non-partisan entity commissioned by Congress.

But Dershowitz contended that to the extent "that the statute at issue constrains the power of the president to conduct foreign policy, it is unconstitutional."

"Even if the GAO were correct in its legal conclusion — which it is not — the alleged violation would be neither a crime nor an impeachable offense," he wrote.

"It would be a civil violation subject to a civil remedy, as were the numerous violations alleged by the GAO with regard to other presidents."

Dershowitz said the GAO got the constitutional law "exactly backwards."

"It said that the 'faithful execution of the law' — the Impoundment Control Act — 'does not permit the president to substitute his own policy priorities for those congress has enacted into law,'" he wrote.

Dershowitz posed a hypothetical situation: "Congress allocates funds to Cuba (or Iran or Venezuela). The president says that is inconsistent with his foreign policy and refuses to release the funds. Surely the president would be within his constitutional authority. Or consider the actual situation that former President Barack Obama created when he unilaterally made the Iran deal and sent that enemy of America billions of dollars without congressional approval. I do not recall the GAO complaining about that presidential decision, despite the reality that the Iran deal was, in effect, a treaty that should require senate approval that was never given."

He pointed out the Ukrainian funds were sent "without strings."

Dershowitz addressed the question of why a government agency like the GAO would "get it so wrong as a matter of constitutional law."

"There are two obvious answers: first, in the age of Trump there is no such thing as nonpartisan. The political world is largely divided into people who hate and people who love President Trump. This is as true of long term civil servants as it is of partisan politicians. We have seen this with regard to the FBI, the CIA, the Fed and other government agencies that are supposed to be nonpartisan. There are of course exceptions such as the inspector general of the Department of Justice who seems genuinely non-partisan. But most civil servants share the nationwide trend of picking sides. The GAO does not seem immune to this divisiveness."

And he added: "Second, even if the GAO were non-partisan in the sense of preferring one political party over the other, it is partial to Congress over the president. The GAO is a congressional body. It is part of the legislative, not executive, branch. As such, it favors congressional prerogatives over executive power. It is not surprising therefore that it would elevate the authority of Congress to enact legislation over that of the president to conduct foreign policy."

The White House Office of Management and Budget disagreed with the GAO opinion.

OMB spokeswoman Rachel Semmel said OMB "uses its apportionment authority to ensure taxpayer dollars are properly spent consistent with the president's priorities and with the law."

The GAO was accused of trying to influence the Democrats' attempt to impeach and remove President Trump.

An administration official told Fox News: "GAO’s findings are a pretty clear overreach as they attempt to insert themselves into the media’s controversy of the day. Further, GAO has a history of the flip-flops, reversing 40-years of precedent this year on their pocket rescission decision, they were also forced to reverse a legally faulty opinion when they opposed the reimbursement of federal employee travel costs. In their rush to insert themselves in the impeachment narrative, maybe they’ll have to reverse their opinion again."