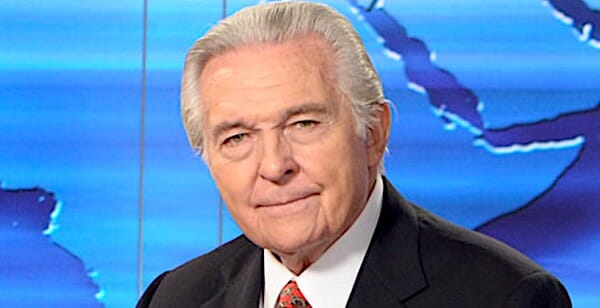 Longtime end-times preacher Jack Van Impe has died at the age of 88.

"The beloved Dr. Jack Van Impe was welcomed into Heaven by His blessed Savior and Lord who he had so faithfully served in ministry for over 70 years," said an announcment on the website of his ministry, Jack Van Impe Ministries International.

"Please pray for his beloved wife and lifelong ministry partner Rexella and their families as they grieve this immense loss and for wisdom as she and the Board lead the ministry in the days ahead."

Hundreds of mourners commented on the site, including Eric Johnston, who wrote: "I have watched him for over 30 years and I just turned 40 this month! Like losing family. I will be praying constantly for Rexella. Keeping mind that we will all be together very soon!"

He had a television ministry, wrote books and produced movies. He was host of his own half-hour show, "Van Impe Presents", on current events, for some 30 years.

"Alongside his wife Rexella, Van Impe read the latest headlines and explained how they connected to prophecy about the Antichrist, one-world government, and the rapture of true believers that might happen at any moment," Christianity Today said.

He once explained that he only reported the news from papers and magazines, CT said, but "we use the Word of God to show you that it means Christ is coming."

He was born in Freeport, Michigan, in 1931 to two Belgian immigrants.

"Jack's father Oscar worked in a Plymouth auto factory by day and as a musician in the Detroit beerhalls by night. Oscar taught young Jack to play the accordion – sometimes, as Jack would later recall in his conversion testimony, with violent and drunken beatings," the report said.

But Oscar and his wife, Marie Louise Van Impe, were convereted at a Baptist church in 1943, and the family abandoned the beerhall community and started performing gospel songs.

He was ordained in 1951 following graduation from Detroit Bible College and then worked with both Youth For Christ and Billy Graham.

Graham's son, Franklin Graham, CEO of the Billy Graham Evangelistic Association and Samaritan's Purse, said Van Impe's life showed the importance of "laying up these words of Mine in your heart and in your soul. … May we all be inspired to do the same."

He was known to have memorized thousands of Bible verses and sometimes was called the "Walking Bible."

Van Impe and Rexella Shelton were married in 1952, and they founded Jack Van Impe Crusades in 1970.

His early sermon topics included "The Coming War with Russia" and "Shocking Signs of the End of the Age."

He warned of communism, homosexuality and abortion.

His work moved into radio in the 1970s and television the followiong decade.

The television show moved to the Trinity Broadcasting Network in 1988, and by the mid-1990s, CT reported, "Jack Van Impe Presents" aired weekly in about 25,000 cities in the U.S. and Canada, and in more than 150 other nations around the globe.

Of late, he "increasingly worried about Islam after the terrorist attacks of 2001."

He later left TBN in a disagreement over his criticism of Christian leaders who declined to take a strong stand against Islam.

The cause of death was not announced.