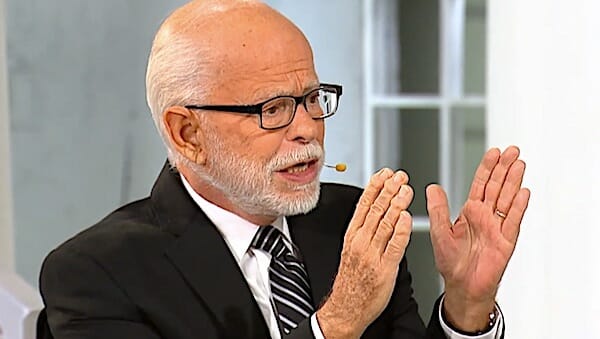 A well-known American televangelist best known for the collapse of his personal empire due to sex and financial scandals in the 1980s now says supporting President Donald Trump "is a test whether you're even saved."

Jim Bakker, who just turned 80 last week, said on his Monday broadcast of "The Jim Bakker Show": "You know what? Trump is a test whether you're even saved."

Here is Jim Bakker saying that Trump is a test to determine whether or not people are "saved."

The comments section below is here for you, twitter-have at it. pic.twitter.com/LTlYmA5ZlV

"Only saved people can love Trump," Bakker continued, collecting laughter from some on his panel and in his audience.

"No. You gotta really be saved. You gotta forgive. You forgive when you're saved," he added about 40 minutes into the program.

Bakker also discussed 2020 politics and defended Trump, saying, "He keeps signing things to protect the church, and he’s helped Israel, and recognized Israel. He’s fulfilling (the) Bible, whether you like it or not."

"The demons of hell were impeaching the president as I was taping this show recently," he added, as a photograph of House Speaker Nancy Pelosi was displayed on screen.

Fed up with misconceptions that are being taught in countless churches? Learn astonishing Bible truth on a higher level than ever before with the Holy Spirit-filled books by Joe Kovacs

A video clip dispatched on Twitter with Bakker's remarks has been viewed nearly 1.4 million times since it was posted Monday evening.

Overall reaction has not been kind, with comments including:

This is the Jim Bakker I know. pic.twitter.com/vKrC69sEE2