The United States economy currently enjoys the longest period of expansion in history. The economy has been growing for more than 10 and a half years, since the end of the Great Recession of 2007-2009. Behind the current expansion is the rise of the U.S. to become the world's leading energy producer.

According to NBER, there have been seven U.S. recessions during the last 50 years. The recession of 1969-1970 coincided with attempts to close budget deficits from the Vietnam War and the raising of interest rates by the Federal Reserve.

In 1973, the Organization of Petroleum Exporting Countries (OPEC) quadrupled oil prices, triggering the 1973-1975 recession, which at the time was the most severe recession since World War II. Rising gasoline prices hammered consumers, and unemployment reached 9%. The federal government mandated a 55-mph speed limit and established the Strategic Petroleum Reserve. This was the first of recent recessions caused by high oil prices.

The next decade brought a short recession in 1980, followed by a deeper recession in 1981-1982. The Iranian Revolution of 1979 caused oil prices to rise to over $120 per barrel, causing a world energy crisis. To counter rising inflation from the 1970s, the Federal Reserve tightened monetary policy, boosting home mortgage rates to double-digit levels. Unemployment soared to 10.8%. 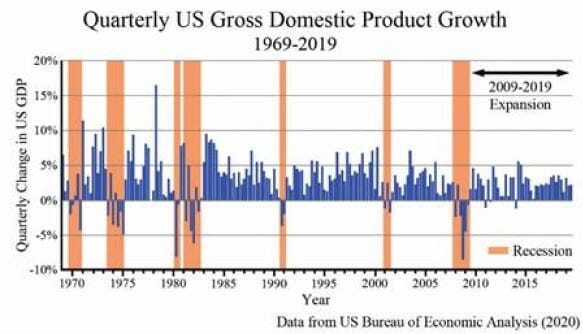 The recession of 1990-1991 was caused by a combination of the 1987 stock market crash and the collapse of the U.S. savings & loan industry. Soaring oil prices from Iraq's invasion of Kuwait in the summer of 1990 also contributed to the slowdown.

The economic slump of 2001 was one of the few recent recessions where oil prices were not involved. This recession was caused by a combination of the collapse of the speculative dot-com bubble, the stock market pull-back in 2001 and the Sept. 11, 2001, attacks. This recession ended the decade-long period of growth in the 1990s.

The Great Recession of 2007-2009 was 18 months long, the longest since the Great Depression of 1929. The subprime mortgage crisis caused the recession, leading to the collapse of a U.S. housing bubble and the failure of several financial institutions. World crude oil prices spiked to $164 per barrel in June of 2008, adding to the crisis.

Of the seven U.S. recessions since 1969, high world oil prices were the primary cause of three of the slumps and a contributing factor in two other recessions. Oil price shocks played a major role in both U.S. and global economic instability over the last 50 years.

But during the last three decades, U.S. geologists and petroleum engineers learned to extract oil and natural gas from shale rock formations by using the technological breakthroughs of hydraulic fracturing and horizontal drilling. This U.S. shale revolution now appears to have removed oil shock as a factor in economic instability. 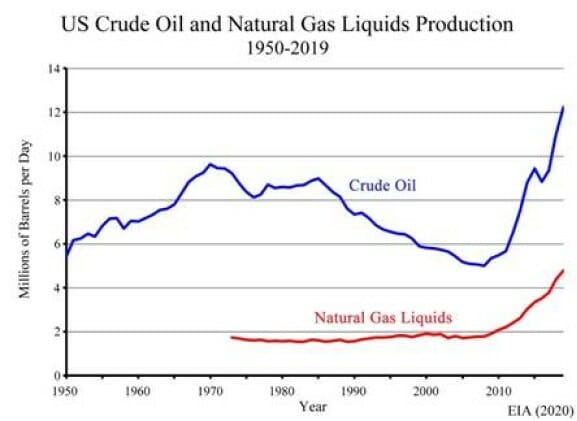 But because of breakthroughs in shale oil technology, U.S. crude production soared beginning in 2008, reaching 12 million barrels per day last year, more than double the 2008 output. Production of natural gas also more than doubled from 2008 to 2019.

On Sept. 14 of last year, 25 drones and missiles exploded at two oil processing facilities of Saudi Arabia. More than 5.7 million barrels of Saudi production capacity was taken offline, more than half of Saudi output. But oil prices hardly budged.

On Jan. 8 of this year, Iran fired more than a dozen missiles at two Iraq facilities housing U.S. military personnel. Yet, world oil prices today remain at low levels, just above $50 per barrel. The missile attacks on Saudi Arabia and Iraq in previous decades likely would have triggered significant oil price spikes.

The shale revolution and ramping U.S. oil production brings a new level of stability to U.S. and world economic systems. There will still be recessions, but U.S. recessions will be less frequent and less severe since oil dependency and price shock are no longer significant factors.

Steve Goreham
Steve Goreham is a speaker on the environment, business, and public policy and author of the book "Outside the Green Box: Rethinking Sustainable Development."
Bernie scolds Elon Musk for taking subsidies Sanders made possible
Fewer recessions thanks to the shale revolution
Leftists say 'no meat' -- but the world thinks otherwise
Your cup o' joe is filled with pesticides?
See more...