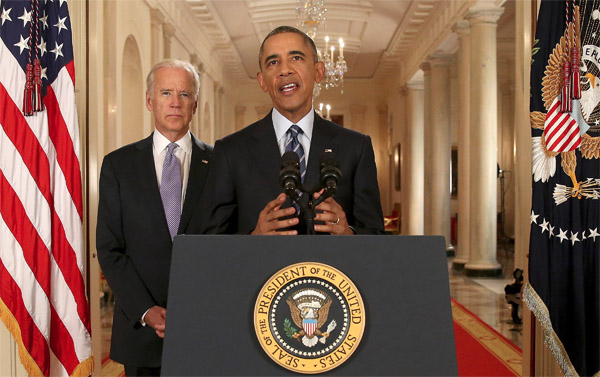 Iran's supreme leader, Ayatollah Ali Khamenei, is promising retaliation against the U.S. for launching a missile strike in Baghdad that killed his top general, Qassim Suleimani.

The New York Times called Suleimani "a powerful strategist who represented Iran's influence across the region." The paper explained the death was "a considerable blow" to Tehran, because, "as the leader of the Quds Force of the Islamic Revolutionary Guards Corps, which leads Iran’s operations abroad, Maj. Gen. Qassim Suleimani, who was 62, was the country’s top security and intelligence commander.

"He behind nearly all military and intelligence operations orchestrated by Iran in the past two decades and directed Iran-backed militias in the fight against the Islamic State."

But the White House under Barack Obama in 2015 had a different view when it was cutting a deal with the Islamic regime, recounted Lee Smith, a senior fellow at the Hudson Institute, at the time.

"Obama likes Suleimani, and admires his work. As the president reportedly told a group of Arab officials in May, the Arabs 'need to learn from Iran's example,'" Smith wrote.

Obama told the Arab leaders they should learn from the Quds Force and develop their own local proxies.

The Obama administration, Smith wrote, saw Suleimani as the key to the Iran deal, the Joint Comprehensive Plan of Action, insisting it was irrelevant that the Iranian general was on the U.S. terror list.

"Like everyone else in the Middle East, the Iranians understood that when Obama failed to strike Syrian president Bashar al-Assad in September 2013 for crossing his redline against the use of chemical weapons, there was no way the president would ever order military action against Iranian nuclear facilities," Smith wrote. "When Obama took that option off the table, he signaled to Iran that he wasn’t going to stop them because he thought there was no way to do so."

Smith said the negotiations actually were about "what Obama ... described as a new geopolitical equilibrium, which would stabilize the Middle East and allow the administration to further minimize its role in the region. The way Obama described it publicly, this new security architecture was going to balance Iran against traditional American allies, like Saudi Arabia."

Then a problem arose.

"It soon became apparent that the White House wasn't really balancing at all, but had rather chosen one team over the others, Iran. Obama made his preference for Iran and its allies clear—in Lebanon, Syria, and most obviously in Iraq where the White House ordered air strikes on ISIS positions that allowed various Iranian-backed outfits, under the leadership of Qassem Suleimani, to take Tikrit."

"The way Obama sees it, the Quds Force can be the administration's boots on the ground," Smith said.

"The administration argues that Tehran will spend most of the money from sanctions relief on rescuing the economy, or fixing street lamps and potholes, and not so much on terrorism and other foreign adventures. But there can be no similar argument about buying and selling and smuggling arms since ending the embargo can only help the hardliners. Combining the two—tens of billions of dollars in immediate sanctions relief and an end to the embargo—is like loading a gun and handing it over to Qassem Suleimani. And that’s precisely what Obama intended: The way he sees it, he’s arming an American ally."

At JihadWatch, Islam expert Robert Spencer cited Smith's 2015 report, commenting that Obama, "as always," was "on the side of America's enemies."

"Soleimani was responsible for the deaths of numerous Americans," he wrote. "That makes him a 'revered' figure to the leftist establishment."