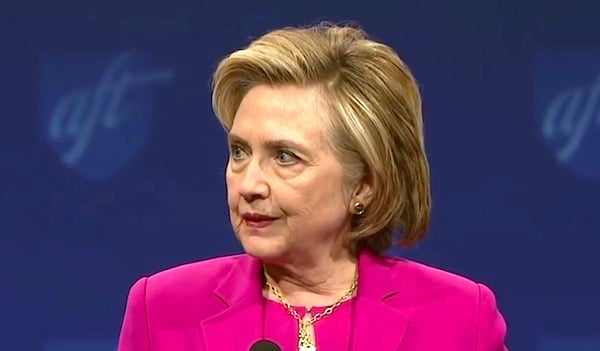 The organization on Friday released 37 pages of new Clinton emails recently found by the FBI.

"These documents further underscore the need for a fresh, unbiased and thorough criminal investigation into Clinton's blatant malfeasance – and the related DOJ, FBI, and State Department cover-up," he said.

In an email exchange on Aug. 31, 2011, Clinton top aide Huma Abedin wrote that she sent Clinton "a couple text messages" and offered to "send Monica [Hanley] to hamptons to help you get organized."

Other newly obtained emails had information about the Muslim Brotherhood, and there was a "global health doc" in a classified email chain, an intelligence memo on Libya, a request for comments on a planned trip to Egypt and a memo from a senator about Somalia.

Fitton has urged the Trump administration to appoint a special counsel to investigate.

Clinton was subpoenaed for the entirety of the emails she sent on her unsecured private server. However, repeated lawsuits by Judicial Watch have uncovered many more, including some containing classified information.

Judicial Watch noted some of obstacles it has faced in its effort to obtain related documents.

"The State Department did not provide information about where the emails were found; why they were not previously produced; or if additional records are anticipated," Judicial Watch said. "Last month, a Justice Department attorney could not tell a federal court judge how and where the FBI discovered the new cache of Clinton emails. The State Department previously claimed it had produced all releasable Clinton emails, including emails recovered by the FBI that Hillary Clinton tried to destroy or withhold. The State Department initially claimed all responsive emails had been produced in 2018, but then found more emails which were produced, for the first time, early last year."