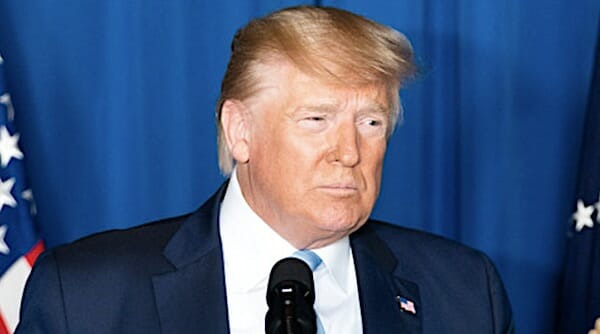 A Hollywood headliner told the Islamic radicals in Iran who have been killing American soldiers for years that he's willing to assassinate President Trump for half of the "bounty" they offered.

It's not the first time a self-important personality has threatened violence against the president, and the Twitter news aggregator Twitchy is wondering how much attention the Secret Service will give the threat.

George Lopez just said he’d assassinate President Trump for half of the $80 million dollar bounty.@SecretService should take a look at this.

The Left is sick. pic.twitter.com/hNCsMwOTrV

The personality is comedian George Lopez, who offered to kill Trump for half of the $80 million Iranian authorities put on the president's head.

"People are claiming this was a joke. HAHA, right? Except this isn't funny, at all," Twitchy wrote.

"He's clearly desperate for attention, any attention. Even if that attention is from the Secret Service. Years ago, this editor saw Lopez perform in Denver and he was SO funny and so entertaining …. And now he's just so angry and so nasty."

Absolutely! It's not a joke. Some freakin' idiot will take it seriously. This has GOT to stop!!!!🤬

Eric Carmen, the former lead singer of the Raspberries, wrote on Instagram, "This has got to stop!"

Charlie Kirk added on Twitter: "Facts: Between 384 & 807 civilians were killed during 563 targeted strikes by Barack Obama. Trump used one surgical strike to kill the world's leading sponsor of terror. Which president do you think George Lopez volunteered to assassinate?"

The Secret Service has confirmed it interviewed rapper Eminem when his lyrics included threatening statements about President Trump in 2017.

He called the president a "kamikaze that will probably cause a nuclear holocaust." And he referenced Ivanka Trump being murdered in the back of his car.

Such violent rhetoric is becoming more common in the political arena, and Victor Davis Hanson warned recently in a Daily Signal column that there are "James Hodgkinsons" out there who turn those words into action.

Hanson, a historian at the Hoover Institution at Stanford University and author of "The Second World Wars: How the First Global Conflict Was Fought and Won," cited one of the more prominent threats to Trump.

That's from Joe Biden, who said, "If we were in high school, I'd take him behind the gym and beat the hell out of him."

Hanson noted that one year later, Biden "doubled down on his physical threats."

Hanson speculated wrote that had former Vice President Dick Cheney "ever dared to say something similar of President Barack Obama, what would the media reaction have been?"

But then Sen. Cory Booker, D-N.J., took up Biden's refrain: "Trump is a guy who you understand he hurts you, and my testosterone sometimes makes me want to feel like punching him, which would be bad for this elderly, out-of-shape man that he is if I did that. This physically weak specimen."

Actor Robert De Niro has repeatedly expressed a desire to physically assault Trump. A month before Trump was elected, De Niro said of him, }I'd like to punch him in the face."

Later, De Niro doubled down with a series of 'F— Trump' outbursts."

James Hodgkinson was a Bernie Sanders supporter who in 2017 tried to assassinate Republican members of Congress at a practice for a charity baseball game.

Hanson also noted that Rep. Rashida Tlaib, D-Mich., just hours after she was sworn in, said at a rally that she had promised her young son, We're going to impeach the motherf—-r."

There were no reprisals, and such acceptance of threats is going to "haunt the country long after Trump is gone," Hanson said.

Entertainer Kathy Griffin held up a facsimile of a decapitated Trump head, and Madonna threatened to blow up the White House.

"Celebrities such as Johnny Depp, Snoop Dogg, George Lopez, Moby, Rosie O’Donnell, Mickey Rourke, and Larry Wilmore seem to relish the media attention as they discuss or demonstrate what they consider to be creative ways to kill the president," Hanson wrote.

He said he's not sure if the threats represent hate for the president, attempts to revive a sagging career or both.

"The current climate is becoming scary," he said, reminding readers that those expressing those threats "should worry about where their boasts will finally lead if any of the thousands of James Hodgkinsons in America take such threats seriously and act upon them."