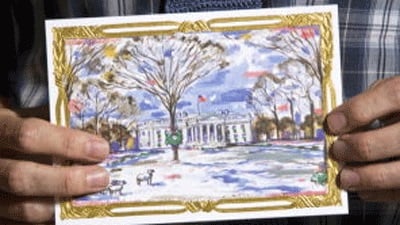 But a card by a notorious magazine wished members of Congress a Merry Christmas with an image of a dead Donald Trump.

It apparently was intended as a sarcastic response to a sarcastic remark by Trump during his campaign, when he said, "I could stand in the middle of 5th Avenue and shoot somebody and I wouldn't lose voters."

CNN, which has openly opposed President Trump throughout his tenure, said the card spotlighted the loyalty of his supporters, "many of whom tell reporters and pollsters that almost nothing could make them change their mind about voting for Trump."

The front of the card showed a cartoon holding a smoking gun with a caption, "I just shot Donald Trump on Fifth Avenue, and no one arrested me."

The inside of the card showed a dead, bloody Donald Trump with two shotgun wounds. People surrounding Trump's dead body were shown cheering his assassination, including Santa Claus and a child.

That image was captioned: "Merry Christmas! From all of us at Hustler."

It's just the latest reference to the assassination of the president in media. Actress Kathy Griffin infamously released an image of her holding a bloody severed Trump head.

On Twitter, Lee Frazier wrote, "Hustler is getting a visit from the FBI."

Twitter user Integralist Kanye wrote it's "particularly ominous when you realize Trump is merely an avatar on which to project their hatred for every insufficiently woke American."