Many people believe the Founding Fathers left many "rights" out of the Constitution and Bill of Rights. Stuff like the right to food. The right to housing. The right to a college education. The right to health care (particularly for illegal aliens). Heck, even the right to abortions, the right to be called by a preferred pronoun and the right to free feminine hygiene products, even in men's restrooms. If these dead white men were so brilliant, why didn't they include these "rights" when they wrote those documents?

Because public education is currently in the hands of progressives who are briskly producing generations of illiterates, I thought this might be a suitable time for a brief primer on what a "Right" (with a capital "R") really is. In fact, five words will determine whether or not something is a true "Right."

In a nutshell, the Bill of Rights guarantees Americans the Rights of free speech, free (peaceable) assembly, freedom of religion, freedom of press, freedom to bear arms, freedom against unreasonable searches and seizures, freedom from being deprived of life, liberty, or property without due process of law, a right to trial, freedom from cruel or unusual punishment and many other such critical items.

But you'll notice one common theme among every Right listed in the Bill of Rights: They don't cost anything. This is the litmus test whenever anyone claims they have a new and creative "right." If it costs someone something such as time, money or labor, it's not a Right.

Those five words – "if it costs someone something" – distinguishes true Rights from false ones.

Why? Because all these so-called "rights" force someone else to provide those things to you, often at the point of a gun. 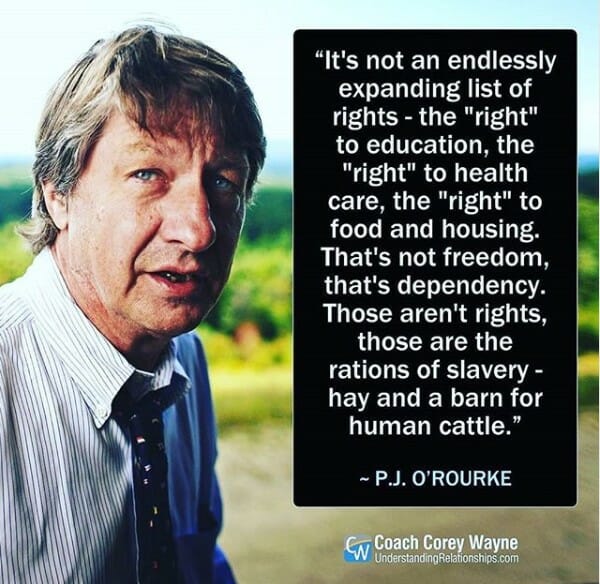 "Free" health care means doctors and hospitals must provide you with medical attention. Who pays the doctors? Are they forced to work for nothing, or are other people forced to pay their salaries through their taxes?

"Free" education means instructors must teach you. Who pays these instructors? Are they forced to work for nothing, or are other people forced to pay their salaries through their taxes?

And on and on it goes. Even that most elemental necessity of existence, food, is not a "right" because providing it to you means it costs someone else money, time and labor to provide.

"[I]f one person's right entitles them to another person's labor, the forceful imposition of slavery must be counted among the just powers of government," notes Alan Keyes. "Slavery, however, involves the extinction of liberty."

In other words, if you have the "right" to (pick one) food / shelter / medical care / college / transportation / abortions / feminine hygiene / jellybeans – and if you want the government to force people to provide those things to you – then you are enslaving a portion of the population who are force to provide their time/labor/money against their will.

This is the beauty of the American system: With our true Rights protected by the government, we're free to strive for our Wants. This freedom to obtain our Wants has resulted in the highest standard of living – even for poor people – the planet has ever seen. "Despite the many complaints about 'increasing wealth inequality,' even left-wing ThinkProgress acknowledged in 2013 that the world's overall standard of living is the highest ever in man's history," observes Selwyn Duke in the American Thinker. "The reason? The spread of healthy, meritocratic market systems – of economic freedom."

If you take away our true Rights and substitute whatever trendy manufactured "rights" anyone can think up, you might as well dismantle America (which – what a coincidence – the progressives want more than anything else). Take away the freedom to strive for our Wants in the name of "fairness" and "equality," and everyone suffers.

We have the Right to life, liberty and the pursuit (not the guarantee) of happiness. The reason those things are Rights is because 1) they're derived from our Creator, not the government; and 2) they don't forcibly take resources (time, labor, or money) from anyone else to provide. There is no finer incentive to succeed than the need to provide the basic necessities of life without government assistance.

Providing all the needs and wants in life is up to you – as long as the government stays out of it. And therein lies the problem. Most people – especially but not exclusively the left – wants government to "fix" what are perceived to be imbalances in the system, without understanding many of those imbalances spring from government interference in the free market in the name of "fairness."

A few quotes are worth mentioning from some notable intellectual giants:

And my personal favorite:

Remember, if something costs taxpayers money or requires someone to provide a good or service against their consent, IT IS NOT A RIGHT. It is an unconstitutional entitlement.

Patrice Lewis
Patrice Lewis is a WND editor and weekly columnist, and the author of "The Simplicity Primer: 365 Ideas for Making Life more Livable." Visit her blog at www.rural-revolution.com.
'Biden bucks': The horrors of digital currency
Conservatives have become the enemy
The late great city of Seattle
Meet the Hermits
We peasants aren't listening! The elite media's echo chamber
See more...