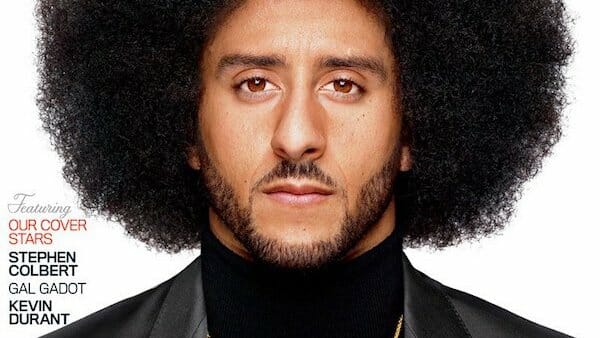 Ex-NFL quarterback Colin Kaepernick became a folk hero to many progressives and liberals across the nation when he disrespected the national anthem by kneeling before games in protest of "racial injustice," back when he was playing for the San Francisco 49ers.

He's been out of football for several years now, since his political activism became front-page news and he led the 49ers to three straight years of missing the playoffs.

But his activism has continued, including recently when he complained to Nike, for whom he's a spokesman, about a Betsy Ross flag image on a pair of shoes, and the design was immediately trashed by the shoe company.

At least judging by the tongue-lashing he's been getting from various people for his comment about Qassem Soleimani that, "There is nothing new about American terrorist attacks against black and brown people for the expansion of American imperialism."

Soleimani, in fact, was the chief of a terror team sponsored by Iran who is blamed for the deaths of hundreds, if not thousands, of American soldiers. President Trump ordered a strategic strike last week that killed Soleimani, explaining that the U.S. had information the Iranian terrorist was planning more attacks on Americans.

In the New York Post, Rich Lowry noted there has been some "idiotic commentary" about the destruction of the terrorist, but even among that, "Colin Kaepernick's [comments] deserves a place of honor."

"The NFL washout and Nike persona who makes sure the company doesn’t produce any overly patriotic sneakers tweeted: 'There is nothing new about American terrorist attacks against black and brown people for the expansion of American imperialism,'" he wrote. "For Kaepernick, Soleimani is just another dark-skinned man brutalized by America. The Iranian terror master was, in effect, driving while non-white and paid the ultimate price. For all we know, the operator of the MQ-9 Reaper drone that took him out was making a white-supremacy hand signal while unleashing this racist attack."

Lowry explained, "This interpretation of events takes identity politics to a whole new level, defining the blood-drenched hit man for a terroristic, profoundly anti-Semitic, deeply intolerant theocracy as a victim, based on his skin color alone."

Lowy said the facts are that Soleimani had "prodigious amounts of American blood on his hands (of Americans of all races and creeds), but he mainly killed other people in the Middle East — Syrians opposed to Bashar al-Assad, Iraqis protesting Iranian influence, anyone who got in the way of the Iranian imperial project.

"His end is a boon to humanity, which should be obvious to anyone who isn’t drunk on ideology or racial obsessions."

"Because everything is racist. Everything. Even fighting back against terrorists who kill Americans. Nike, feeling proud?" she said on social media.

She added, "Killing a terrorist is not about skin color; it's about protecting our country form a guy who murdered hundreds of Americans, period."

And she added, "If you think Soleimani was killed because of his skin color, you’re the one who needs to educate herself. Work on shaming someone else."

At the Patriot Post, the editors pointed out that "Kaepernick wasn’t the only delusional leftist spouting anti-American sentiments in the wake of President Donald Trump’s green lighting the mission to take out Iran’s number one terrorist."

The commentary cited "celebrities" who came up with "stunningly obtuse statements."

One was Rep. Ilhan Omar, D-Minn., who "vacuously suggested" that Trump ordered the strike as a "distraction."

"Leftmedia 'news' outlet CNN complained that the 'air strike feels like [an] attempt to create a distraction from impeachment and build support for Trump.' Furthermore, CNN has embraced Iran in spinning the flawed narrative that Trump’s decision has now endangered Americans, when in fact Trump’s decisive action has done the opposite," the Post continued.

The Modesto, California, newspaper reported Sen. Lindsey Graham, R-S.C., called Kaepernick a loser "on and off the field."

"He has no idea what the Iranian regime has done to the region, he has no idea that they have 600 American deaths as a result of IEDs made in Iran and used in Iraq," Graham said. "It's un-American ... He’s a racist. If you’re looking for racism in America, Mr. Kaepernick, look in the mirror. Your country is not the problem! It’s the Iranian and you’re so blinded by your hatred of Trump that you can’t see the difference between who we are and who the Ayatollah is."