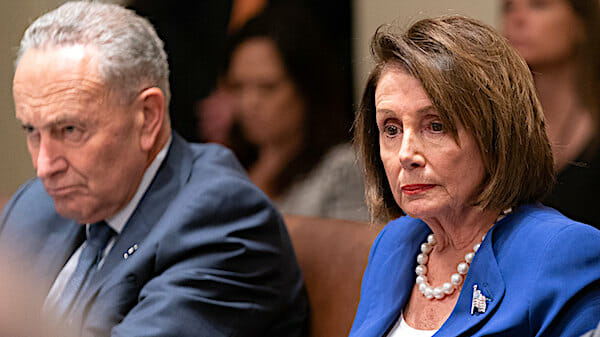 Nor will it prevent his re-election in November, and they know that, he said Monday.

So why are Democrats putting the nation through all the misery?

In the Senate trial, scheduled to begin Tuesday, Democrats accuse the president of obstruction of Congress and abuse of power.

They're pushing for witness testimony that they failed to incorporate into their House impeachment investigation.

"Democrats are seriously putting the country through all of this – not to mention establishing this precedent that impeachment now is just a traditional political operation that can be used constantly against a president of the opposing party, all of this – in order to try to defeat four Republican senators and win control of the Senate, which is the epitome of abuse of power for personal political gain," Limbaugh said.

"Can you think of anything else? You talk about abuse of power, this phony impeachment scenario for personal political gain?" he said. "The Democrat Party, that's what they're accusing Trump of. They are actually engaging in it.

"The whole thing just infuriates me, that this has not been dismissed, that the Republicans cannot come up with a way to just dismiss it, that they're afraid of what the media will say or what the Democrats will say. 'Well, there are some witnesses that need to be'

"The Republicans, many of them, are still stuck in this belief that the Democrats set the agenda, the media sets the narrative — and it, thus, must be responded to rather than just quashed. It just is infuriating to hear Republicans debating whether to call additional witnesses," he said.

Limbaugh explained the Democrats have only the distant hope of a takeover of the Senate, which would allow them to stop Trump's appointment of judges during his second term.

"You know I have always believed that the Democrats have known that Trump was not gonna be convicted in an impeachment trial in the Senate," he said. "So why do this? What's the purpose? The worst thing that could happen is for Trump to be acquitted. I mean, here they've got this three-year investment into Trump being a traitor and a Russian spy, a Russian agent, whatever else they have said he is. With all of it, they don't have an impeachable offense."

He said Democrats have given up on beating Trump in November.

"Now, you might disagree, and you might think it's too soon, and you might think, 'No, they'll never concede those kinds of things, Rush. You know them well enough to know that that's not true.' I think… We’'e heard enough of them say, 'If we don't impeach Trump, he's gonna be reelected.' Look, folks, they have their own internal polls. They know that things out there in America are rosier and better than they have been in many people's lifetimes, that there is no reason under the sun to change horses here," Limbaugh said.

Democrats "never thought they would actually be able to remove Trump from office via impeachment, either."

"I think as I've watched these things happen in the past, well, weeks and days, I think they obviously want to dirty Trump up. They want to put an asterisk next to his name. There's some Clinton payback here as well," he said.

"What if they could find a bunch of Jeff Flakes in the Senate to go against Trump and then lose their reelection? The Democrats could take the Senate, hold the House, and then totally thwart whatever Trump agenda, whatever Trump judicial nominees there are? I think this, my friends, is the key. I think they hope to use this Senate trial to win control of the Senate in November and effectively neuter Trump's second term."