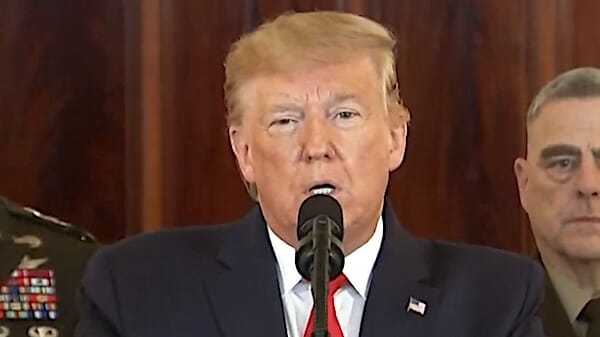 Talk-radio host Rush Limbaugh says House Speaker Nancy Pelosi should seek a Senate dismissal of the two articles of impeachment against President Trump she had House Democrats in the House approve.

It's because the alternative is acquittal in a Senate trial, and only a dismissal of the charges would allow Pelosi to maintain her charge of a Republican "cover-up."

Pelosi said at a news conference Thursday she probably will send the articles of impeachment over "soon," but she is demanding "to see the arena in which we are sending our managers."

Senate Majority Leader Mitch McConnell already has made it clear that the House doesn't have the authority to dictate how the Senate runs the trial.

Limbaugh said on his show Thursday: "Miss Pelosi, I realize I’m not as smart as you are, but if you have two options — you send ’em over there and you get an acquittal or the Senate dismisses and you get a chance to run around and say, 'That’s an admission of guilt. These partisan Republicans don’t even want the trial. They’ve dismissed the charges. Trump’s guilty' — which of those two options is the better? Certainly not acquittal! She’s just made the case for advocating that the Senate dismiss the charges."

Limbaugh said Pelosi should be "pushing for a dismissal because the alternative is an acquittal, and an acquittal does not help her. "

Limbaugh said the "last thing" Democrats should want is an acquittal.

"She should be pushing [Senate Majority Leader Mitch McConnell] to dismiss the charges based on what she just said here. 'Dismiss equals admission.' There’s your solution, Madam Speaker! There is your answer. She should be pushing for a dismissal of charges and then run around and say, 'The Senate knows Trump's guilty, and that's why they dismissed the charges 'cause they don't have the guts to do a trial.'"

Actually, Limbaugh said, there's "nothing to try because she doesn't have a case."

"This is why she's not gonna send 'em over, but she just made the case… I’m sorry to be redundant here. She just made the case for advocating that the charges be dismissed because, in her view, that’s a tantamount admission of guilt. A reporter said, 'Madam Speaker, are you planning to hold the articles indefinitely?'"

Pelosi said, "I'll send them over when I’m ready, and that will probably be soon."

Limbaugh said the Democrats' demand for witnesses in a Senate trial is awkward, since they had the chance to hear from the witnesses in the House but chose not to.

McConnell is right, he said, that the demand for new witnesses means the Democrats don't have a case.

It's not the job of the Senate to do investigations, McConnell has said.

Limbaugh paraphrased McConnell saying to Pelosi: "We don't do your job. We're not gonna look for things underneath rocks that you couldn't find. We're not gonna turn this place into a spectacle like you made your place."