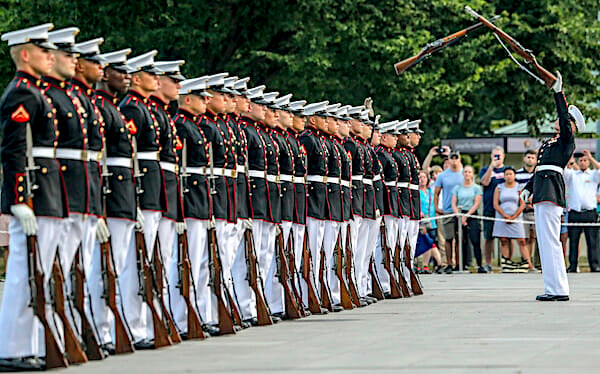 The Marine Corps' censorship of a private company's decorative "dog tags" with Bible verses is unconstitutional, warns a legal group threatening a lawsuit.

First Liberty Institute issued the warning in a letter to the Marines' trademark licensing office after it demanded that the company Shields of Strength stop creating the tags for which it is licensed.

"Your directive that SoS remove all Biblical references from its Marine Corps-licensed products is unconstitutional and violates [the federal Religious Freedom Restoration Act law], said the letter to Jessica O'Haver, the director of the Marines' trademark office.

"Likewise, your directive on June 26, 2017, that purported to prohibit 'controversial passages that may offend some' is unconstitutional," First Liberty said.

"SoS does not relinquish its First Amendment rights by virtue of its status as a license-holder. Indeed, any requirement that SoS subject itself to such censorship as a condition to receiving a license would itself be an unconstitutional condition."

First Liberty noted SoS had been producing its products for decades. But the USMC received a complaint from the Military Religious Freedom Foundation, and it ordered a halt to the products.

"Events of the past several weeks make clear that our military personnel are constantly exposed to danger," said Mike Berry, chief of staff for First Liberty Institute.

"And yet the MRFF seeks to deny them the freedom to wear Shields of Strength."

Berry said that "denying our troops a source of inspiration, hope, and encouragement simply because it contains a religious message is an outrage."

"The Marine Corps should tell the MRFF to support our troops, not punish them."

SoS has provided hundreds of thousands of the pieces of jewelry to members of the U.S. military.

Run by Kenny Vaughan and his wife, Tammie, for more than 20 years, the company donated during the Iraq War "over 50,000 pieces a month and even fulfilled a single request for 30,000 pieces."

But because of the Marines' "unconstitutional" capitulation to FFRF, Shields of Strength had to decline a recent request for 2,000 replica dog tags made by a Marine Corps unit.

First Liberty said the tags "were to be distributed upon request to individual Marines, many of whom could soon be deployed to the Middle East during rising tensions."

"It's frustrating that those who are fighting for our freedom can't have a Shield simply because the military is afraid of an outside activist group," said Kenny Vaughan.

First Liberty said that once the government "has created a limited public forum via a trademark licensing regime, it cannot 'discriminate against speech on the basis of its viewpoint.'"

"The Marine Corps is therefore prohibited from discriminating against [Shields] because of its inclusion of biblical references on its products, in its advertisements, or on its website."

The letter said the license held by SoS obtained in 2018 "does not contain any restriction or limitation on the use of religious words or symbols."

The letter warns the Marine Corps must respond within 10 days or "we are prepared to take any and all necessary legal action."

The company and its legal team also are fighting a case against the Army, which made similar demands based on a complaint from the FFRF.

In the case, First Liberty warned Army officials that a "government that roams the land ... scrubbing away any reference to the divine will strike many as aggressively hostile to religion."