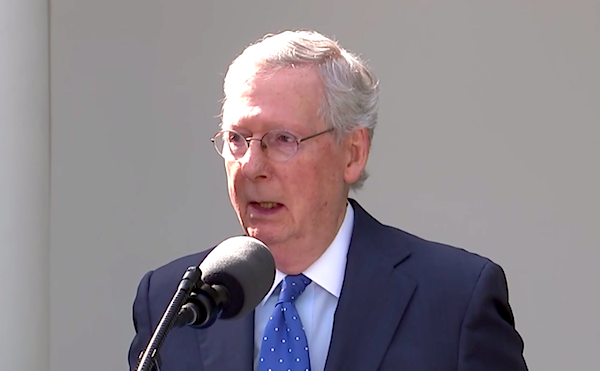 Nobody knows exactly what House Speaker Nancy Pelosi, D-Calif., intends to do with the two articles of impeachment her party approved.

They normally would have been sent to the Senate, where the Constitution requires a trial to be held. Instead, she has kept them.

Apparently, she's trying to pressure the Senate to have her way with the trial, even though the Constitution gives her no role.

But no one really expects a conviction in the Republican-controlled chamber, where a two-thirds vote is required to convict.

On Friday, Senate Majority Leader Mitch McConnell revealed what the Senate will be doing until Pelosi decides to part with the articles

Now McConnell says he's going to simply do the Senate's normal business until Pelosi sends the articles of impeachment over. Think confirming judges/nominees and passing USMCA

"We're not sure the Dems thought this one all the way through," noted Twitter news aggregator Twitchy.

The site compiled a list of comments about the Democratic strategy.

"Real brain genius stuff to hold them back as if McConnell is eager for a trial," said Liam Donovan.

Twitter user Everett said: "Now McConnell is setting up votes on nominees for next week. Impeachment, it seems, will wait!"

And Grant Addison wondered, "How are the Dems so, so bad at this."

The Hill pointed out that McConnell hasn't been taken in by Pelosi's demands.

He said it was a "non-starter" that she would play "any role" in the trial.

"We've heard it claimed that the same House Democrats who botched their own process should get to reach over here into the Senate and dictate our process," McConnell said in a speech on the Senate floor.

"Let me clarify Senate rules and Senate history for those who may be confused. First, about this fantasy that the speaker of the House will get to hand-design the trial proceedings in the Senate, that's obviously a non-starter."

Democrats claim they want a "fair" trial in the Senate. Yet when the matter was in the House, the Democratic majority picked the witnesses, conducted depositions in secret and selectively leaked portions of testimony to the media.

McConnell, however, has pointed out that what Democrats and GOP members agreed upon for Bill Clinton 20 years ago is far different from what Democrats are demanding now.

"The structure for this impeachment trial should track with the structure of the Clinton trial," he said. "We have a precedent here."