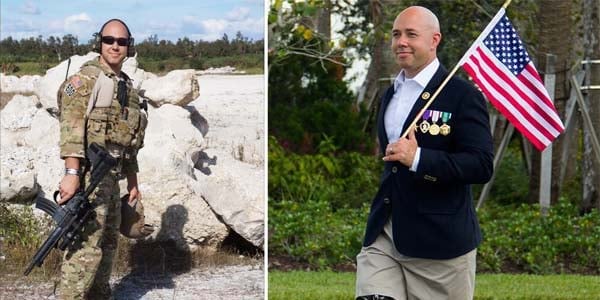 Seldom, if ever, has such a powerful point been made by a Congress member without saying anything.

.@RepBrianMast asks for name of fallen service member that doesn't justify Soleimani killing: "I will sit here and wait..."

.@RepEliotEngel: "Thank you, Mr. Mast, I think you've made you're point…"

Rep. Mast: "Mr. Chairman, I have not yielded back my time." pic.twitter.com/V5dagi54QD

Mast, a retired U.S. Army bomb technician and Purple Heart recipient who lost his legs because of the likes of Soleimani, challenged Democrats who have complained that taking out Soleimani made the Middle East less stable.

The Business Insider reported he asked during a congressional hearing: "If you walk about this hallway … you're going to come to several beautiful walls that have the names of our fallen service members from the war on terror. And I would ask, can any of you provide me with one name on that wall that doesn't justify killing Soleimani?"

He said he had two and a half minutes left of his time and would wait for a response.

"Somebody provide me with a name on that wall that does not justify his killing."

Soleimani, the leader of the Iranian Quds Force, was killed after Trump authorized a rocket strike on his convoy. His responsibilities had included training militants to attack U.S. personnel and assets.

It was during a hearing of the Foreign Affairs Committee that Mast argued against the "caution" from his Democratic colleagues.

He argued that such a terrorist is always a threat.

When Mast pointed out he had not yielded, Engel called him "out of order."

The Insider noted the "tense exchange illustrated the differing opinions of the two parties on Capitol Hill after the killing of Soleimani" in Baghdad, Iraq, on January 3."

The website Flag and Cross commented: "The man knows a thing or two about taking out an enemy when he sees one. One Tuesday evening, Mast asked a poignant question that no Democrat could answer. And it was glorious.

"Even though Soleimani was both directly and indirectly responsible for thousands upon thousands of deaths, possibly even millions, Democrats continue to fight POTUS every step of the way. Dems are literally outraged that Trump did what he did to rid the world of a monster in order to keep innocent men, women, and children alive. Something to think about."

One Democrat, Rep. Alexandria Ocasio Cortez, promised her constituents she would "step in" and stop the president from protecting Americans in this way.