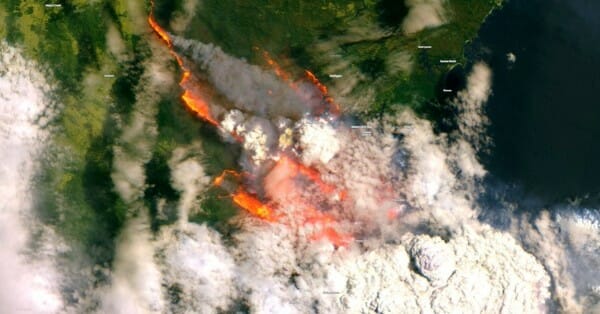 A Muslim teen who was accused along with his brother of starting a fire in Australia was seen laughing as he left court in Sydney on Tuesday.

Fadi Zraika and his brother Abraham, both 18, allegedly set off fireworks that started a grass fire at a park in Guildford, near Sydney, on Dec. 22, the Daily Telegraph reported.

On Monday, the New South Wales police force announced it had charged 24 people with deliberately starting catastrophic fires that have ravaged many parts of the country. The blazes are so widespread they can be seen from space.

The Daily Telegraph said police were called to the park about 2:40 p.m. after reports of several loud explosions were followed by small grass fires that spread rapidly in sudden winds.

The fires were put out by the Rural Fire Service.

In 2018, the ISIS-linked Al-Ansar Media claimed wildfires in California were retribution for America's participation in the civil war in Syria.

WND reported in 2013 that William Scott, a former National Security Agency official, said terrorists had been using fire as a tactical weapon.

Scott said at the time that after U.S. Navy SEALs killed al-Qaida chief Osama bin Laden, they "captured a treasure trove of material that provided some unprecedented insight into the al-Qaida plans. And one of those was a detailed campaign for starting fires throughout the [American] West."

In 2012, al-Qaida called on its followers to set forest fires in the United States. In its magazine Inspire, the terrorist organization presented instructions for the creation and ignition of "ember bombs."

In 2003, an FBI memo warned that a senior al-Qaida detainee told interrogators he planned to spark multiple, catastrophic wildfires simultaneously in Colorado, Montana, Utah and Wyoming to strike a blow to the U.S. economy.