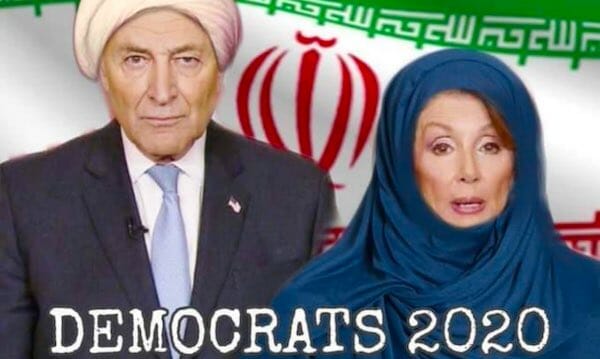 "The protesters are protesting — as I understand it, this brand of protesters — about the fact that that plane went down," Pelosi said in an interview with ABC News Chief Anchor George Stephanopoulos on "This Week on Sunday."

"And many students were on that plane and these are largely students in the street."

However, over the weekend students at universities in Tehran specifically denounced the regime.

Among the chants were "They are lying that our enemy is America! Our enemy is right here!" And Reuters reported some outside universities in Tehran and the central city of Isfahan were heard on videos Monday shouting "Clerics get lost!"

M. Hanif Jazayeri, a London-based Iranian opposition activist, wrote on Twitter that chants of "Death to the dictator" were heard in the "farthest-reaching districts of Iran."

He posted video from the small town of Eyvanki in Semnan Province.

"The masses are turning on the mullahs," he wrote.

For a 2nd straight day tonight, #IranProtests in the small town of Eyvanki target the mullahs' Supreme Leader. "Death to Khamenei" can be heard from the crowds in this film sent via MEK activists. The people of Iran want regime change #FreeIran2020

With the hashtag #NancyPelosiFakeNews trending on Monday, many tweets accused Pelosi of defending the regime in her ABC interview.

President Trump retweeted one with a doctored image of Pelosi and Senate Minority Leader Chuck Schumer in Islamic headcoverings.

"The corrupted Dems trying their best to come to the Ayatollah's rescue," reads the tweet.

The corrupted Dems trying their best to come to the Ayatollah's rescue.#NancyPelosiFakeNews pic.twitter.com/a0ksPHeXCy

There are reports that security forces fired tear gas at crowds of protesters and possibly live ammunition over the weekend.

In the interview Sunday, Pelosi acknowledged that protests last year were "against the regime."

But she added that after "the taking out of [Qassem] Soleimani, there were protesters in the street joined together — as you know — against us, that wasn't good."

Anti-regime activists in the country, however, have claimed via social media that many of the mourners of Soleimani and the anti-American demonstrators were members of the Iranian Revolutionary Guard or family members. And many either were coerced or enticed to show up for Soleimani. In any case, according to Iran analysts, the majority of the nation's population is opposed to the mullah regime.

While students certainly are among the most vocal opponents, the idea that it's only students who oppose the regime hearkens back to the launch of the Islamic revolution in 1979.

Journalist Lee Smith, noted columnist Caroline Glick, explained last week in Tablet online magazine that President Jimmy Carter went along with the regime's designation of the hostage-takers at the U.S. Embassy as "students. If Carter acknowledged they were soldiers of Iranian dictator Ayatollah Khomeini, the U.S. would be compelled to fight back, Lee explained.

Pelosi said the shootdown of the Ukraine International Airlines jet was "a terrible, terrible tragedy and they should be held accountable for letting commercial flights go at a time that was so dangerous."

"But there are different reasons why people are in the street," she said. "Of course we would love to see the aspirations of the people of Iran realized with a better situation there. But escalating the situation — unless we've exhausted every other remedy."

"There are a lot of bad actors who are doing bad things and threatening bad things to us, we know that, Iran being one of them. But how do we deal with that in a way that calms, rather than escalates?"