In the wake of the airstrike which killed Iranian Maj. Gen. Qassem Soleimani, Cardi B decided it was time to decamp to Nigeria in order to avoid the fallout from World War III, which was no doubt imminent.

Now, one Nigerian has a modest proposal for her: How about a trade?

For those of you who missed it, Ms. B (legal name Belcalis Almánzar) announced on Twitter it was high time to hightail after Soleimani's death, referencing the #WWIII memes that had taken over Twitter back when the left thought war was imminent.

“Naaaaa these memes are f---in [laughing emojis] but s--- ain’t no joke! Specially being from New York,” the rapper tweeted.

“Its sad this man is putting Americans live in danger,” she added. “Dumbest move Trump did till date …I’m filing for my Nigerian citizenship.” 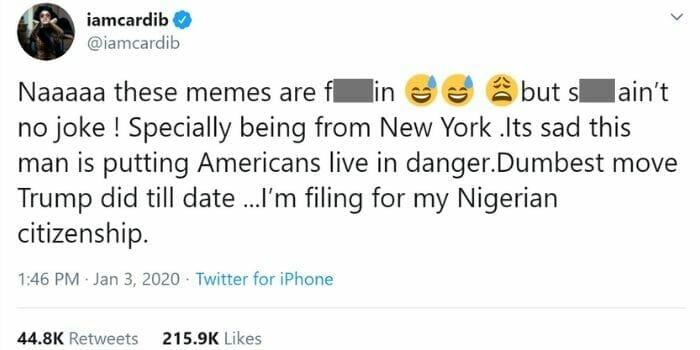 Never mind the fact that Nigeria was ranked the third-most dangerous country in the world by expatriates in InterNations's 2019 Expat Insider Survey and the 16th-most dangerous in the Institute for Economics and Peace's Global Peace Index for 2019, meaning that if you wanted to hide out from war you probably could have chosen more wisely.

Nigerian officials were more than willing to seize upon Cardi B's tweet, with one blue-checkmarked member of the government opening the country's arms to her.

"As one in charge of the Diaspora for [Nigeria], We can’t wait to receive you again. Our doors are open, sister," Abike Dabiri-Erewa tweeted.

"And you need to talk a walk through the Door of Return in Badagry. It’s an indescribable experience."

Cardi B might not need Dabiri-Erewa's help, however, because she has someone willing to exchange places with her.

Cardi B, I am so much ready to give you my National ID Card while you give me your American passport.

"Cardi B, I am so much ready to give you my National ID Card while you give me your American passport," one user, whose Twitter bio says he works in the digital communications field in Lagos, Nigeria, tweeted.

It's difficult to overstate the irony of Cardi B thinking she could escape a chimerical war by going to Nigeria, a country which would place her much closer to dangerous conflict than being in the United States would.

We've seen the response by the Iranians to the death of Soleimani.

They launched 22 missiles into the dirt at two Iraqi bases housing U.S. troops.

We now know the only death directly caused by Iran's military during the action was the tragic downing of a Ukrainian International Airlines flight, which led to the loss of 176 innocent lives.

Meanwhile, do you think that World War III would have dissuaded anyone from emigrating from Nigeria to the United States if they got the chance?

Let's let this happen, at least for a little while. It'll be like "Trading Places."

Cardi B can take the life of Mr. Table Shaker and visa versa.

She'll be able to avoid World War III, right? All by moving into Boko Haram's neighborhood?

This sort of facile tweet, tossed off by a ridiculously wealthy entertainer whose analysis of the Trump presidency has long achieved escape velocity from reality, was covered as if it were news -- the state of the union delivered from the Hollywood diaspora, all in 280 characters or less.

The United States is the greatest, freest society ever created by man, where a member of the middle class has material comforts unavailable to the wealthiest in many of the world's nations.

Nigeria has none of these things going for it.

No matter how much money an entertainer or magnate has, that won't turn Lagos into Los Angeles.

It won't give her freedom of speech in a country where the government stifles the media on a routine basis.

Cardi B, like hundreds of other entertainers before her, never once had a moment where she planned to leave the United States for Nigeria.

The only reason this deserved coverage is that she didn't just choose Canada or Europe but a country that's 158th out of 189 countries on the United Nations Human Development Index.

She deserves points for creativity in the imaginary destination she set up for herself. That's about it.