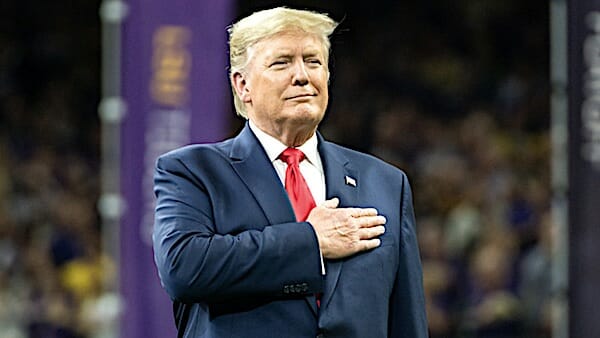 Jeffries, recalling periods of "adversity" in the nation's history, charged Trump "tried to cheat and solicit foreign interference in an American election."

Unhinged: On the Senate floor, Democrat Rep and impeachment manager Hakeem Jeffries compares Trump to terrorists who attacked America on 9/11 and Nazis in WWII pic.twitter.com/qczaXAHs56

"America is a great nation. We can handle adversity better than any other country in the world. Whenever American has found itself in a tough spot, we always make it to the other side," he said.

"America is a great country. We can handle adversity better than any other nation in the world, but what are we going to do about our character," he said. "President Trump, tried to cheat and solicit foreign interference in an American election. That is an attack on our character."

A cartoon was posted with an image of Hitler demanding: "Stop comparing Trump to me. I am one of you guys."

And there was the diagnosis, "More @RepJeffries TRUMP DERANGEMENT SYNDROME #MAGA."

Twitter user Dwain Kerr asked, "Is there anything they won't say."

CatchingRye wrote: "The more they talk, the better it is for Trump. Mitch should ask them if they want another 24 hours."

Another Twitter user said, "Let's agree here that we live in a country filled with hate and mental illness."

Twitter news aggregator Twitchy wondered: "And the day isn't over yet. What do the Dem impeachment managers have planned for their grand finale later?"