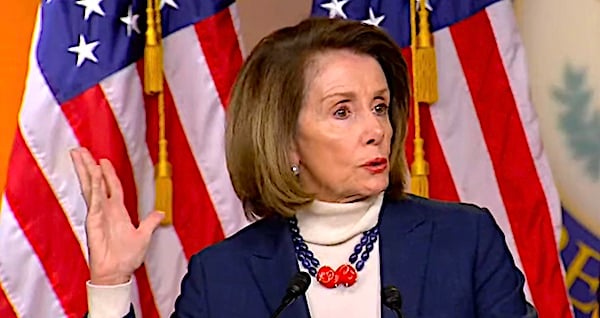 After a delay of more than three weeks pressing for a "fair trial," House Speaker Nancy Pelosi announced Friday she will take steps next week to send impeachment articles to the Senate.

"I have asked Judiciary Committee Chairman Jerry Nadler to be prepared to bring to the Floor next week a resolution to appoint managers and transmit articles of impeachment to the Senate. I will be consulting with you at our Tuesday House Democratic Caucus meeting on how we proceed further, The California Democrat wrote in a letter to colleagues.

This week, as she continued to try to extract favorable terms for a Senate trial, Pelosi was under pressure from several Democratic senators to move ahead.

Among them was Sen. Dianne Feinstein, D-Calif., who told Politico the "longer it goes on, the less urgent it becomes."

"So if it's serious and urgent, send them over. If it isn't, don't send it over," she said.

But Pelosi insisted in her memo Friday that the delay was justified, declaring new information on the Ukraine controversy at the center of the two impeachment articles had emerged.

"I am very proud of the courage and patriotism exhibited by our House Democratic Caucus as we support and defend the Constitution," she wrote.

Pelosi has pressed Senate Majority Leader Mitch McConnell to disclose the resolution that would set the terms for the trial, including the calling of witnesses. McConnell, however, made it clear that the Constitution gives the House no authority in such matters, and he charged Thursday that Pelosi was playing "irresponsible games."

McConnell has said the Senate resolution governing the impeachment trial will be similar to the one used for Bill Clinton's trial in 1999. After setting the timeframe for the trial, it would allow the Senate to determine how to handle possible witness testimony and documentary evidence after both sides have made opening statements.

Most resolutions can pass with a simple majority of 51 votes while removal from office requires a supermajority of 67 votes.

"From the beginning, it's been unclear what the goal of this hurry-up-and-wait tactic was or what the country stood to gain. We now know the answer was nothing," he said.

The Republican senator said three weeks of "uncertainty and confusion" have caused even more division.

"Regardless, I will take my role as a juror seriously and review the evidence presented by both sides before making any determination," he said.